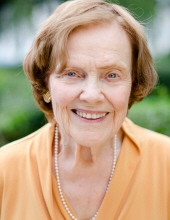 Ruth Pauline (Johnson) Strathmeyer, 97, passed away peacefully on Thursday, November 10, 2022, at Hospice of the Chesapeake in Pasadena, Maryland. She had been a resident of Brightview Senior Living in Annapolis, Maryland since 2019 and was previously a longtime resident of Galesville, Maryland where she and her husband enjoyed sailing after his retirement.

She earned a Bachelor’s Degree in Science from Drexel Institute of Technology in Philadelphia and met her beloved husband, Richard Dehne Strathmeyer of York, Pennsylvania, while participating in music programs there. They were married for 60 years until his death in 2005.

Besides her family, Ruth’s passion was music, and in particular the music ministry. She studied piano as a child at the Philadelphia Conservatory of Music (now the Philadelphia College of the Performing Arts) and began serving as a church organist as a young woman. In mid-career, she earned a Bachelor’s Degree in Organ Performance from Carnegie Mellon University in 1967.

Ruth was devoted to her music ministry, serving as organist and choir director for at least eight Lutheran churches across three states and as a substitute organist for many others, spanning a career of more than 50 years. She was a respected organist in each of the communities she served, being selected to lead large regional church services in venues including the Carnegie Music Hall of Pittsburgh. In addition to her music ministry activities, she also gave private piano lessons and taught music classes at schools. After retiring from permanent church positions, she continued to serve as organist and pianist for religious services at her senior living facilities well into her 80s.

Ruth was born in Audubon, New Jersey on February 28, 1925, the daughter of Beatrice Ida (Bertolet) Johnson of Audubon and Gunard Johnson of Tysnes, Norway. She is survived by a sister, Dorothy Christine (Johnson) Nelson of Cresskill NJ; a son, Carl Richard Strathmeyer and his wife Andrea of Lunenburg MA; daughters, JoAnn Elizabeth Strathmeyer and her husband Norman Saunders of Annapolis MD, Susan Louise Passmore and her husband David of Great Falls VA, and Audrey Jean Farnsworth and her husband Shane of Hampstead NH; nine grandchildren; and two great-grandchildren.

There will be a private burial at Prospect Hill Cemetery in York, PA. A Celebration of Life will be announced at a later date. Arrangements are being handled by Heffner Funeral Chapel and Crematory, Inc., 1551 Kenneth Road, York, PA.

In lieu of flowers, the family requests that donations be made to a church ministry or benevolent charity of the donor's choosing.