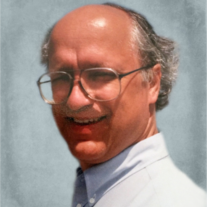 James O. Henriksen, 73, passed away on Saturday, April 6, at home in Lewes, DE, after a hard fought battle with Idiopathic Pulmonary Fibrosis. Founder and CEO of Wolverine Software Corporation, Jim and his wife, Judy, moved from Alexandria, VA to Lewes in 2011. He anticipated retiring with the move, but never could give up his passion for contributing to the evolving field of computer simulation.

Jim was born in Muskegon, MI, the youngest of three children to parents Anna and Henry Henriksen. He attended public schools in Muskegon and spent summers working in his father's auto glass business, learning mechanical and interpersonal skills that served him the rest of his life.

Jim graduated from the University of Michigan with a B.S. Degree in 1967. Having already developed a love of percussion while in high school, he joined the Michigan Marching Band and spoke proudly of Michigan's football success that took him to the 1965 Rose Bowl in Pasadena, CA. He remained an avid college football fan forever.

Jim's University of Michigan graduate MBA courses were interrupted in the Spring of 1968 when he was drafted into the US Army. Thinking he was headed to the jungles of Vietnam he, instead, was diverted by special Pentagon order to work with the Safeguard Antiballistic Missile Program. He was given the highest level top secret security clearance allowing work with Critical Nuclear Weapons Design Information. Spending two years in the DC area, Jim grew to love Virginia, happy to be away from the cold and grey Ann Arbor winters. His military service introduced him to people and situations that influenced greatly his career decisions in the months following his discharge in 1970.

In spite of his dislike of the long Ann Arbor winters, Jim returned to Michigan after being invited to work at the Michigan Computing Center. He remained there for four years working as a research and teaching assistant, all the while building his interest in, and ideas for, problem solving using computer simulation software.

In 1974 Jim was happy to return to the DC area, having been offered a job with the large defense contractor, CACI. Within a year, however, he left CACI and founded Wolverine Software Corporation in order to pursue his goal of building a “better mousetrap” in the form of a more powerful simulation program than that previously introduced by IBM. His work in taking on the giant was successful and formed the solid foundation for Jim's future programs including simulation animation. Jim's work has remained prominent in the field of computer simulation for over four decades.

Jim taught graduate level courses for five years as an adjunct professor of computer science for Virginia Tech Northern Virginia Graduate Center. He has given numerous presentations on simulation at conferences, corporations, government organizations, and other universities around the world. His sense of humor was legendary, even when speaking his 2nd language, German. He was fond of saying, “If you are not part of the solution, you are part of the problem.” He had a clear vision of his goals and ideals, always raising the bar by seeking perfection.

Over the course of his career, Jim authored over 50 books and articles and was working currently on what would have been his last work. He was indebted to Jim Wilson for helping him so much in recent months as his health began to fail. Jim also would want to thank Bob Sargent for his on-going support when he most needed it, and Tom Schriber for his advice and friendship over more than half a century.

Of the many awards Jim received over his lifetime, he felt honored to have been selected Titan of the Year and Keynote Speaker for the Winter Simulation Conference held in Monterey, CA in 2006. In 2013, Jim was video interviewed as a Simulation Pioneer for the Computer Simulation Archive located at North Carolina State University Libraries. And, in December 2018, in Gothenburg, Sweden, Jim was given the prestigeous Lifetime Professional Achievement Award by INFORMS, premier international computer society with over 10,000 members.

Jim also enjoyed a variety of activities outside his professional endeavors. He loved keeping fit and worked out regularly at a gym. He enjoyed competition on all levels and played a fierce game of racquetball. In earlier years he participated in sailboat races on the Chesapeake Bay. He was a hiker and a bicyclist who loved exploring new parks and trails. He loved his dogs, of which there were many over the years. Jim never gave up his love of classical music and volunteered in several concert bands, including the Virginia Grand Military Band, commuting back to Alexandria to play Timpani and other percussion at the Schlesinger Concert Hall and Arts Center.

Jim developed lasting professional relationships and loyal friendships all over the world. Known by all who met him for his brilliance, patience and kindness, Jim was a special man who made a difference in the world, his community, and in the individual lives of many.

A private service for Jim will be held in June in Michigan. At a later date, a few close friends will gather in Alexandria to share a meal and memories.