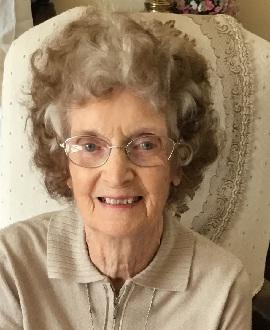 Gladys Dry, 92, of Chestnut Knoll, Boyertown, formerly of Stowe and Pottsville, passed away Thursday, Aug. 1, 2019, at her residence.

Born Rita Gladys Vera Hough on May 19, 1927, in Manchester, England, she was a daughter of the late George N. Hough and Dorothy S. (Lee) Hough McHugh.

Gladys met her husband in 1945, when he was stationed in England during World War II. She immigrated to the United States and married Clyde on Jan. 20, 1947.

Gladys was a homemaker most of her married life but worked in the cafeteria of West Pottsgrove Elementary School, Stowe, prior to her retirement. She was a member of St. Peter's Lutheran Church, Pottstown.

Private service and interment will be at Schuylkill Memorial Park, 75 Memorial Drive, Schuylkill Haven, at the convenience of the family. Grabowski Funeral Home, Schuylkill Haven, is in charge of arrangements. Memories and condolences can be shared at www.grabowskifuneralhome.com. In lieu of flowers, memorial contributions may be made to Make-A-Wish Foundation

or to the charity of your choice