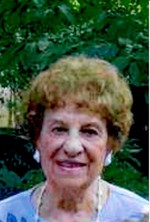 The Life of JENNIE T. SCHMEHL

Jennie T. Schmehl (Difederico), 92 of Kenhorst passed away in the evening of January 12, 2023 at Berks Heim of natural causes.

Born May 18, 1930 in Reading, PA she was the daughter of the late Eva Mary and Sylvester Frederic. She was a graduate of Reading Catholic High School. She was the widow of the late Eugene N. Schmehl who died July 15, 2005, they were married 53 years.

She was employed by Raylon Corporation and later by Tiny Treasures Nursery School until her retirement. Jennie was a member of Saint Peter's Roman Catholic Church, Catholic Woman’s Club, and Green Valley Country Club.

She was predeceased by a sister, Marie Price and a great grandson, Adrien.

Kuhn Funeral Home, West Reading is honored to serve the Schmehl family. Condolences may be expressed at kuhnfuneralhomes.com.