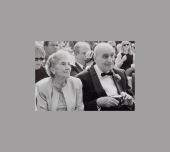 The Life of Malcolm Stuart Demurjian

Malcolm was an incredibly healthy man for his first 96 years, but started to decline after his

beloved wife of 64 years, Seta, passed away in 2020. Even with an aged body and weakened

heart, he was still enjoying dinners out and loving life with his grandkids – until a massive heart

acute rehab for a solid month. He came home on Saturday, supported by hospice services and a

live-in home health aide, so he could be with his equally aged dog Ricco, see friends and

neighbors, and rest among his memories of Seta.

Malcolm had a brilliant analytical mind and an unconditionally loving heart. He attended New

college at age 16, joined the Navy to fight in World War II as soon as he turned 18, and returned

his Master’s degree from Columbia University. Malcolm played a pivotal role on the Whirlwind

Computer Project at MIT for four years, before being recruited by DuPont to lead the 62-person

joined RCA’s corporate staff as an internal management consultant, during which he served on

Indiana, and William Cahill in New Jersey. Refusing to relocate his family from South Jersey,

Malcolm’s work ethic didn’t wind down on the weekends, as he could fix just about anything in

his home, on his cars (all Chryslers), or at the Haddontowne Swim Club he co-founded. He was

Philadelphia Orchestra. Yet, above it all, was a boundless love for his immediate and extended

family. There was nothing Mal wouldn’t do – in time or money – to help those he loved.

Malcolm will be sorely missed by many friends and neighbors, but especially by his son Stuart,

Malcolm lived a full and vibrant life, clobbered the actuarial tables, and closed the book on his

His soul will be blessed by St. Gregory Armenian Apostolic Church at 10:30 AM on Saturday,

September 24 th , at Arlington Cemetery in Drexel Hill, when he is laid to rest alongside his

siblings, Lorna and Bobby, and his parents, Gabriel and Armine. Malcolm’s life, along with that

of his deceased wife of 64 years, Seta, will be celebrated during Thanksgiving weekend.

In lieu of flowers or gifts, donations in his name will be gratefully received by the Philadelphia