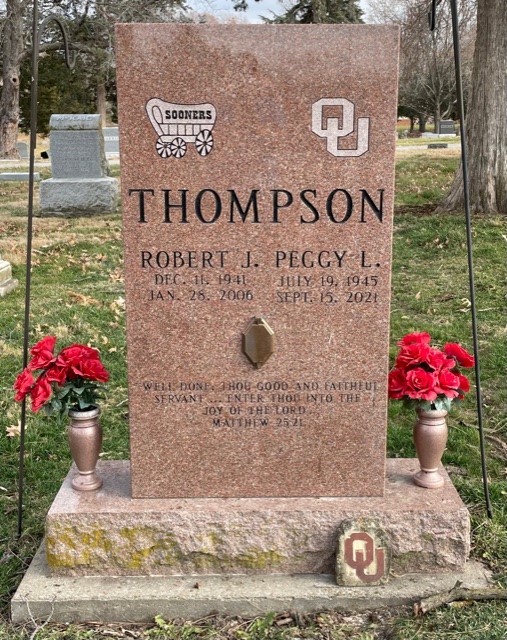 The Life of Peggy Lynn Thompson

Peggy Lynn Thompson, 76, of Olathe, KS passed Wednesday, September 15, 2021 at Good Samaritan Society in Olathe. A private burial service will be held Monday, September 20, at Olathe Memorial Cemetery.Mrs. Thompson was born July 19, 1945 in Ponca City, Oklahoma to George and Claudine Brower. She graduated from Ponca City High School in 1963, then went on to attend Oklahoma State University where she was a member of the Pi Beta Phi sorority. During her sophomore year Peggy married her college sweetheart, Bob Thompson, on August 26, 1964. Despite their alumni status with OSU, both Peggy and Bob remained staunch Oklahoma Sooners Fans all their lives.She was an incredible wife, mother, grandmother, and recently became a great-grandmother. She spent her life providing loving support and devotion to her family and friends. In later life she gained another family member…her pet chihuahua, Ricky. She will always be known for her “booming” laugh and as a fantastic cook. Her chicken fried steak, roast and fried okra meals are legendary within the family and can never be replicated.One of Mrs. Thompson’s more proud moments came in the fall of 1963, where she was honored as “Miss Ponca City” and represented her town in the Arkalalah Festival. What made this moment notable for Peggy was that she rode on a parade float with one of her favorite actors and Oklahoma native, James Garner.Mrs. Thompson was preceded in death and now reunited in Heaven with her husband, Robert (Bob) Thompson, in 2006. She is survived by a son, Mr. Scott Brower Thompson of Olathe, KS; three daughters, Mrs. Kristen Lynn Todd of Olathe, KS and Mrs. Carey Jane Elsbernd of Olathe, KS and Mrs. Leigh Elizabeth Smith of Olathe, KS. Ten grandchildren: Nicole, Sophie and Nate Thompson; Sam and Jack Todd; Abbey, Bradley and Joshua Elsbernd; Mack Montgomery and Beau Smith. One great grandchild: Saige Cecile Todd.In lieu of flowers donations can be made to:Alzheimer's AssociationP.O. Box 96011Washington, DC 20090-6011https://www.alz.org/get-involved-now/donateKansas City Pet Project7077 Elmwood AvenueKansas City, MO 64132EIN: 45-3067615https://kcpetproject.org/donate