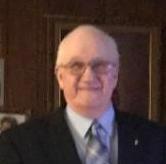 Born in Pottsville, PA on November 25, 1941, he was the son of the late Walter and Julia (Kovalchick) Buchinsky.

Micheal was a graduate of Saint Clair High School, Class of 1961. He worked as a pipefitter and welder for 43 years with the Pipefitter's Local Union 524 out of Scranton until retiring in 2005.

Michael was a member of St. Nicholas Ukrainian Catholic Church in Saint Clair and the 61 Club. He was an avid race car fan who loved going to Big Diamond Raceway and the former Anthracite Raceway. He also loved golfing, hunting, the Philadelphia Eagles, and Ford cars, especially Mustangs.

In addition to his parents, he was preceded in death by his twin brother Walter Buchinsky Jr and brother Thomas David Buchinsky.

Devine Liturgy for Michael will be held at 10AM on Thursday July 15th at St. Nicholas Ukrainian CatholicChurch in Saint Clair, with Msgr. Myron Grabowsky officiating.Relatives and friends are invited to visit with the family on Thursday morning from 8:30-10AM at the church.Interment will be held in Schuylkill Memorial Park Cemetery in Schuylkill Haven.

In lieu of flowers, memorial contributions may be made to St. Nicholas Ukrainian Catholic Church Memorial Fund at Morris Street Saint Clair, PA 17970.

The Robert A Evans Jr Funeral Home in Port Carbon is in charge of arrangements.