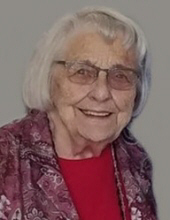 The Life of IVETA MAXINE ZELIADT

Iveta M. (Halberg) Zeliadt, age 98, of Ames, passed away Sunday, April 11, 2021, at Accura Healthcare of Ames.Private family services will be held a later date.Iveta was born September 28, 1922, in Algona, Iowa, the daughter of Charles J. and Margaret L. (Strong) Halberg. In 1924, the family moved to Ames, where Iveta spent most of her life. She graduated from Ames High School in 1940. Iveta met Carl Zeliadt at an Iowa State Memorial Union dance and they were united in marriage on January 26, 1941. To this union, two children were born, Larra Rae and Gary.They made their home in Winterset, Bellevue, Nebraska, and Ames. In 1942, Carl enlisted in the Army Air Corps, since he was stationed mostly stateside, Iveta was able to follow him to California, Texas and Louisiana. When WWII was over, they lived in Ames, Earlham, Dexter, and then back Ames in 1952.Iveta enjoyed being a stay-at-home mom, and was involved in her children's activities. After her children were out of school, she was employed at Donnelley’s in Nevada, Mayfair Cleaners in Ames and then became the secretary for Dr. Oscar Kempthorn in the Statistics Department at Iowa State University.Iveta was always active in the Ames Community. She was a member of the American Legion Auxiliary, where she had served as president. Iveta volunteered at the Mary Greeley Cancer Center, the senior center and as an income tax preparer. She loved driving her friends to appointments and enjoyed the Heartland Senior Center. Iveta’s interests included bingo, bridge, golfing, dancing, music, crocheting, knitting, as well as trips to Prairie Meadows and the Wild Rose Casinos to play the slots!Iveta is survived by her daughter, Larra Rae (Gerald) Miner of Rapid City, South Dakota; son, Gary Zeliadt of Sioux City; grandchildren, Kristin (Marc) Sipma of Rapid City, South Dakota; grandchildren, Anthony Zeliadt of Sioux City; step-grandchildren, Michelle (Cody) Delperdang of Sergeant Bluff and Joe Schmith of Chicago, Illinois; great-granddaughter, Taylor (Conley Knight) Rowell of Spearfish, South Dakota; step-greatgrandchildren, Samantha, Ella, Lily, Leto and Damon; sister-in-law, Iris Mae Starkey of California; several nieces, nephews, cousins and in laws.She was preceded in death by her parents; husband, Carl in 2001; a sister in infancy and grandson, Robert S. Rowell.Funeral arrangements are under the direction of the Adams Funeral Home