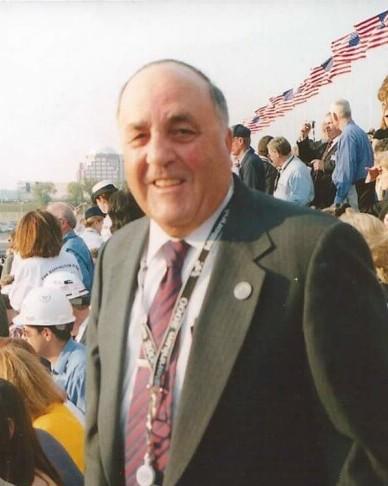 The Honorable Anthony J.  Gabriel, Sr. age 87, beloved husband and loving father passed away peacefully on October 24,2020 surrounded by his devoted family and caregivers at home in Alexandria , Virginia a place he called home for the last 53 years.  Tony as he was known to family and close friends, was born and raised in Peckville, Pennsylvania, the son of Anthony R. and Louise (Simonelli) Gabriel. An alumnus of Blakely High School, he continued his education at the University of Scranton from which he earned a baccalaureate degree. He was a member of the 1955 first Reserve Officer Training Class held with the University of Scranton. Upon graduation from the University he received a commission as a First Lieutenant in the Finance Corps, United States Army and after basic training, at Fort Bragg North Carolina, served active and reserve duty until 1964.

In 1956 Mr. Gabriel began a 33.5 year career with the United States Government in the Philadelphia area starting as an auditor with the General Accounting Office. During an audit at the Frankford Arsenal in Philadelphia, Tony met a young secretary, Anne, who is known as Nancy that would become his wife and lifelong partner. In 1967, the family had grown to a son and two daughters  so Tony moved the family to the Washington DC area for a promotion to a Director within the General Accounting Office.  In 1977 Tony became the Director of the Surveys and Investigative Staff, United States Congress, House Appropriations Committee.  During this time, Tony earned a Masters Degree from Central Michigan University and became a licensed Certified Public Account in the Commonwealth of Virginia. Tony then became an Assistant Inspector General for Audits at the National Aeronautics and Space Administration and joined the ranks of the United States Senior Executive Service. After serving at NASA, Tony  became the Deputy Inspector General at the United States Department of Agriculture overseeing audits and investigations to promote efficiency and integrity in USDA programs concerning waste, fraud, and abuse. In 1987 President Ronald Reagan nominated Tony for the position of the Inspector General of the United States Information Agency. Tony served in that position until his retirement in 1989. During his career, Tony received numerous awards and recognitions for sustained superior accomplishments in management programs of the United States Government and for noteworthy achievement of quality and efficiency in public service.  In 1988 Tony received the Frank J O’ Hara award for distinguished achievement in public service from the University of Scranton.

After a short break, Tony returned to Federal Service as a contractor performing audits and investigative work for the United States Congress. Tony retired for the second time in 2006 culminating 50 years of public service. Tony was a member of the American Institute of Certified Public Accountants, Institute of Certified Professional Managers and the Virginia Society of Certified Public Accountants.  In retirement, Tony and Nancy travelled and spent quite a bit of time at their summer home in North Wildwood, New Jersey where they lived the beach lifestyle enjoying the weather, ocean, friends and neighbors.  Always physically and mentally fit, Tony was a five plus mile a day walker on the beach in New Jersey and at Fort Ward Park in Alexandria where he had numerous friends to walk with and exchange conversation, ideas and advice.

Dad, I still cannot believe you are gone. My heart aches as I remember all of the laughter and great times and the love you gave to our family all of our lives. I love you dad and miss you. Love, Anne Marie