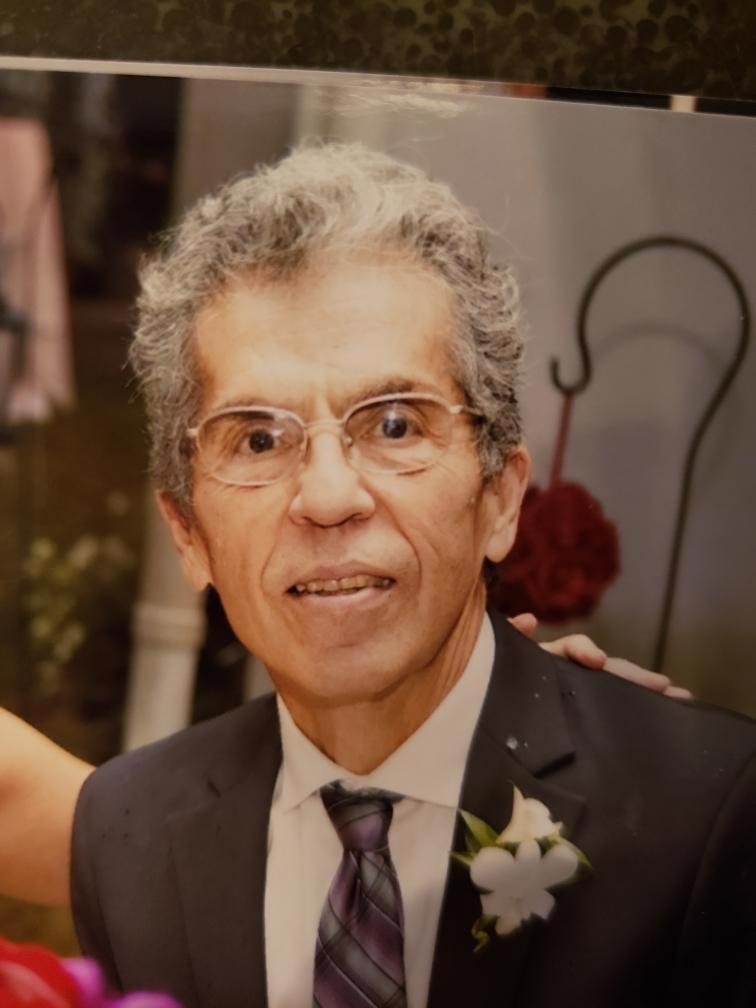 The Life of Samuel A. Leos

Samuel Angelo Leos, 73, of Drexel Hill, PA, passed on July 24, 2020 at his home surrounded by family. Born and raised in Mari, Greece, he came to the USA at age 8 and grew up in Waynesboro, PA.

His undergraduate degree was from Millersville University where he went on to earn Master's degrees in Education from both Temple University and Rosemont College.  He was a teacher of Graphic Arts and Photography at Upper Darby High School for 34 years before retiring, and also was owner and operator of Leos Printing.

Sam was not only a loving and hardworking father and husband, but also a mentor and an inspiration to so many people in his teaching and printing careers. He enjoyed nature, photography, camping, crabbing, spending his summers at the beach with his family and socializing with longtime friends. He was a member of St Luke’s Greek Orthodox Church in Broomall, PA.

Visitation will be open to the public from 6:00 pm to 8:00 pm Tuesday 7/28 at the Toppitzer Funeral Home at Arlington. Due to crowd size restrictions it is requested that you limit your time inside the funeral home to allow an orderly flow and give everyone an opportunity to express condolences to his family. Masks and social distancing will be required.

Due to COVID restrictions, his Funeral Service will be by invitation at St. Luke’s Greek Orthodox Church on Wednesday.

Interment will be at Arlington Cemetery, Drexel Hill, PA 19026.

Contributions may be made in his memory to the Dementia Society of America https://www.dementiasociety.org/donate

Filter Samuel A. Leos's Timeline by the following Memory Categories

I met Sam and Pam in the early ‘70s through Teta who worked with Pam while we lived in Philadelphia near the start of our careers. The four of us would meet at each other’s homes or a restaurant, and we also went camping and canoeing, whitewater rafting on the Youghiogheny, and whale watching off Boston. I respected Sam’s drive and resourcefulness and enjoyed his company. Teta and I moved back to Boston a few years later but we stayed in touch over the decades and miles and still managed to visit with each a few times. In 2013 or so I was able to meet Sam and Pam on the spur of the moment when flying to Oregon thru Philly and my connecting flight was canceled. We caught up on the changes in our lives over the past several years during lunch along the Delaware River waterfront at Penn’s Landing. Very glad we did. Pam, Jason and Tiffanie – so sorry to hear - Yev

Sam Leos
One great friend
I met a great Greek when I was a freshman at York College 1968. He turned out to be a great friend, while enrolled in college, he would also worked at York Hospital laundry to earn money to attend college. He had no one to provided money for college, he had to work through school.
Sam and I as friends did odd jobs together going through school. From working for Manpower, Un-loading hundred -pound feed bags from freight cars, working for UPS, getting up at five to AM to unload 5 UPS trailers each morning. I had great respect for Sam’s great work ethic.
He had a drive to become a teacher, taking college courses , while working and being active in the National Guard. He worked hard so he could earn his college degree from Millersville University.
He met Pam his loving wife going through college. I was one of his ushers at their wedding as he was usher at mine. He was always there being a friend. He was a really family oriented. Loved hs childred!
We enjoyed camping and whitewater rafting, hanging out.with friends.  Great times and great memories.
He was a really great human being, loved to work with students and inspire them.
I was lucky to have known Sam and to have known such a wonderful friend!

To Pam and his children ζωή σε σας “life to you”, and να ζήσετε/ζείτε να τον/τη θυμάστε “may you live/keep living, so that you can keep remembering him.

Kenny (and later Kathy) and I lived across the street from Sam and Pam for many years. Sam was a great neighbor. He was way more handy that I, and always took meticulous care of his house. We would occasionally exchange observations about the satisfaction but occasional challenges (I am thinking of his buying a pizzeria in Lansdowne) of raising our respective children. Sam was a good, solid guy, a good husband and father. We moved away from Drexel Hill about eight years ago and I confess I lost touch. But Pam, Jason and Tiffany you have our sincere condolences

I had the pleasure of first meeting Mr. Leos thru a neighborhood event and he soon became "my favorite guy."  I always loved spending time with him especially when he would talk about his family history.  I remember one time in particular he shared so many stories while pointing out different things and different people on pictures hanging on the wall at the house.  You could tell that he was so proud.  Although our interaction was limited, he definitely had such an impact on me.  I think we all learned a little more about love seing how Mrs. Leos was with Mr. Leos and I have no doubt that he is in peace now.  Keeping Mr. Leos and Family in my prayers.

The first time I met Sam I was nervous.  It’s always a little nerve wracking meeting your girlfriends’ father for the first time.  I knew he was a stoic Greek immigrant and through hard work pulled himself up by the bootstraps to become a successful businessman and teacher.  I was convinced he’d give me the typical hard time most fathers would give their daughters new boyfriend.  I greet with all respect but he doesn’t say a word.  I’m getting more nervous by the second.  I shake his hand, but he still says nothing.  He pulls me in real close and is staring at me intently. Ok, now I’m freaking out, why won’t he say anything!  After what seemed like an eternity and all the while staring directly in my eyes, he asks me very seriously “who was the second President of the United States?”  Luckily, I answered correctly and he started laughing.  I knew I was going to like this guy.  That was Sam in a nutshell to me, serious but funny and kind.  Sam will always live on through the memories of his family and friends, this was just one of the many.  I will always be thankful to Sam, and Pam, for giving me the love of my life.  We’ll miss you buddy.

When I first started teaching at Upper Darby High School I had two mentors, Thom Flood with whom I team taught a Cabinetmaking class (official) and Sam Leos with whom I shared morning duty (unofficial).

Thom taught me class organization and how to manage the class efficiently.  Sam taught me “Life according to Leos.” We had duty out back of the IA building watching the students come up from the park.  We had the opportunity to talk and share our lives every morning and we also were the only two Industrial Arts teachers on the second floor.  We spent a lot of time talking and visiting each other’s classrooms as well.

Sam was one of those teachers who was truly unique.  Teaching Graphic Arts gave him the opportunity to create posters around the room with various saying by both the famous and infamous “Sam Leos”.  He would use the posters as talking points sometimes when working with his students.  He required students to reach and not to settle for the minimum.  He encouraged them not to be “slackers” but to do their best.  Sam was truly there to reach kids and not just be a teacher to have the summer off.

Sam had the ability to laugh with you and also at himself.  Since we taught next to each other we would often cover if one of us was running late to a class.  Sam had a duty on the other side of the building and would often be late to class for that period. I would often let his class in the room and wait for him to arrive.  This was a great group of kids who were up for playing a prank on Mr. Leos.  On this particular day after letting the students in the room we moved the into the Photography Dark Room which was attached to the classroom.  The bell had rung, and a student came in late and was talking to himself about why he was the only one in the class.  A minute or so later Sam came in. They both proceeded to have a conversation about how strange it was that they were the only two in class that day.  Meanwhile the rest of us were in the Darkroom busting a gut laughing about their conversation.  We came out after a minute or so much to Sam's surprise.  Now another teacher might have gotten angry, but Sam took it in stride and enjoyed the laugh along with his students.

Whenever Sam wanted to pass along some particular knowledge, he would often start by saying “So Little Brother” and you knew there was going to be some “Life according to Leos” advise coming your way.  To say Sam was a hard worker was putting it mildly, a prepared insightful teacher, property landlord and small business owner.  Sam was truly a whirlwind of energy and he made sure to have time to socialize with friends and spend time with his family.  I have fond memories of sharing a “frosted mug of brew” at Sam and Pam's house with other high school teachers and their spouses.

After nine years I left the high school and eventually became the principal at Westbrook Park Elementary.  Much to my surprise one day Sam showed up at Westbrook with a gift.  It was a sign for my office door “Mr. Furey Principal”.  This was typical of Sam. He would make the time to help or spend time with a friend.  Over the years Sam had his days angry about something or someone that hadn't gone his way.  But you always knew where you stood. There was never any guessing. Sam did not have any hidden agenda.

My memories of visiting Sam's classes were of seeing a caring teacher who took the department from the days of Industrial Arts with type setting and screen printing to a modern computer lab using state of the art programs.  For many Industrial Arts teachers this may have presented a challenge too difficult to overcome, but for Sam he not only rose to the occasion but created a program that was both academically challenging, technically timely and fun for the students.

Sam had such a positive effect on his students and colleagues.  He was truly a “Big Brother” to his younger department members.   He will be remembered as a gifted teacher, a mentor and a friend who was sometimes bigger than life always enjoying a laugh and there to help someone who was in need.

Sam we will miss you and your spirit will always be with us.