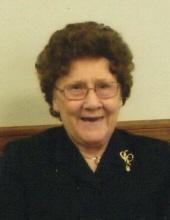 The Life of MARTHA JANE GOODWIN

Martha Jane Burns Goodwin (Sister June) was born on July 2, 1932 in Olmsted, Illinois. She departed this life on June 18, 2020. She was a faithful servant of the Lord and His church all her life. She served as a piano player, missionary, singer, and most importantly, as a pastor’s wife.Sister June was saved as a young girl, and later lived with several other sisters in the church building at 28th and Wilson, in Louisville, Kentucky. While living there, she had a dream that her pastor, Brother William Sowders gave her a telegram. It said, “Go into an open field, plow the ground, and a man will come along and sow seed therein.” When she told that dream to her pastor, Brother Sowders told her that it meant that one day she would work with a man in the ministry.She later found that the dream truly was prophetic: she worked with her husband in the ministry. She married Lloyd L. Goodwin on April 6, 1955. She served faithfully with her husband as he was the pastor of churches in Fort Smith, Arkansas; Des Moines, Iowa; and Kingsport, Tennessee.After the passing of her beloved husband in 1996, she remained true to her vision, and continued to encourage others while she served as a fine example of a Christian lady.