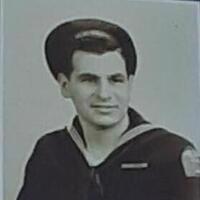 The Life of Angelo Marsella

Age 95 years, passed away on May 22, 2020 at his daughter's home in Upper Darby, PA.  Born and raised in Philadelphia, PA, he went to South Philadelphia High School.  He made his home in Upper Darby before settling in Brookhaven, PA.  Angelo worked as an electrician for several contractors before joining The Naval Air Engineering Center where he worked for 24 years as an electrician. He was a member of Our Lady of Charity Parish, and was active with OLC senior group.

Mr. Marsella was a proud WWII veteran. He proudly served in the U.S. Navy and participated in the invasion of Normandy, served in southern France, and the assault in Okinawa. He received the American Campaign Medal, The Asiatic Pacific Campaign Medal, The Victory Medal,The Navy Occupational Asta Clasp, The Philippine Liberation Medal, The Navy Combat Ribbon, and the French Legion of Honor “Chevalier”. Angelo enjoyed attending the 50 year anniversary commemorative dinner of the D Day Landing which was also attended by Queen Elizabeth.  As a proud veteran, he became active with the Media VFW post 3460 and was a member of State and National LST association

His funeral and viewing will be private. Burial in Arlington Cemetery.  Angelo’s family wants to thank the caring staff of Asana Hospice in Ridley Park, PA for their care and special attention given to Angelo.

In lieu of flowers memorial donations may be made to the PA Veterans' Museum (paveteransmuseum.org), Wounded Warriors (woundedwarriorproject.org) or Boys' Town (boystown.org)

To stream Mr. Marsella's service at 1:00 pm on May 27th, please visit the following link: