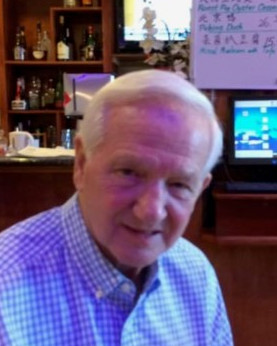 The Life of George W. Spicer

Born on September 30th, 1941. A true Alexandria native who spent his whole life in the area. He never had the chance to know his father who passed away when he was just an infant. Despite never knowing his father George became a caring, passionate provider and father for four boys and a wife that he adored until the day he died.

Growing up an uneducated poor kid in John Roberts Public Housing apartments he worked to provide for his mother, brothers, and sisters. This is also where he met the love of his life, Agnes Gay Franklin.

They soon started a partnership and a love that the greatest of novels written could not describe. Two very underprivileged kids starting a life of hard work and endless love in their teens.

They became partners in a wonderful, inspiring, and sometimes tragic 61-year marriage. They started their first business (Spicers Upholstery)on Duke street and later (Spicers Old Town Antiques)at the corner of Prince and Royal streets in old town Alexandria. With countless long hours, 6 days a week they started a family and began their adventure.

Agnes Blessed him with four sons.

His work ethic was inspiring, infectious, and never tiring. He grew his businesses and invested every extra dollar he had into real estate in Alexandria and the surrounding areas.

He juggled working very long hours, being an attentive husband and an amazing father as he was also amassing his fortune.

Like every amazing story, it did not come without tragedy, the biggest of all was his youngest child at 15 months old becoming ill and needing full-time attention and care for the rest of Wesley’s 29 years of life. He and Agnes cared for him, provided for their family, and remarkably grew their love even stronger for each other through these very painful times. Spending countless hours in hospitals never giving up on his son, family, and his dreams.

A deep love for the outdoors. Hunting, fishing spending time with his sons and wife were his greatest pleasures.

George was a cautious man but a risk-taker when it came to business. Mortgaging his home several times to start accumulating real estate, taking chances most would never have the courage to take. His hard work paid off.

The pride he showed in accomplishing these goals showed in his excitement when he would tell about another deal or opportunity he had acquired. Being a poor uneducated kid from the projects that had accomplished so much, with great respect for others, kindness, and years of back-breaking work, he attained more than most would dream of, even through all the heartbreak and tragedy.

He is survived by his soulmate Agnes, his sons, Ken, Steve, and Chris, and his grandchildren whom he adored Andrew, Owen, Olivia, and Madi!

George lived a full life, with many adventures, and many hardships. Trials and tribulations that only a great man with his courage and fortitude could have accomplished and overcome.

Those who ever had the privilege to know George got to experience the love, empathy, and generosity that his family got to see every day of his life.

George will be missed, the world has lost one of God's amazing creations who touched’ in some way everyone he ever met, so much so that most he knew never called him by his name they referred to him as just “Brother”!

Heaven has received an amazing being and if the lord needs anything accomplished or taken care of he now has the man for any task with the confidence anything asked will be accomplished.

Rest in Peace your Love and Compassion will be missed here on earth.