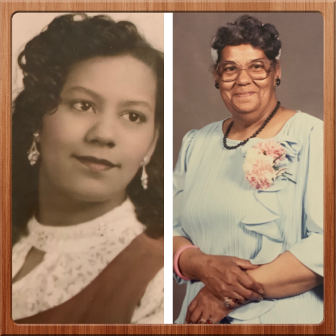 Aliene Elizabeth Knox, 92 of Pittsburgh, departed this life and received her Angel WIngs on Wednesday, July 31, 2019 at 10:14am, at the Allegheny Health Network (Western Pennsylvania Hospital) in Bloomfield.

Born Aliene Elizabeth Williams on January 7, 1927, during the "Depression Era" on Bricelyn Street, in the Homewood Section of Pittsburgh, Aliene was one of six children born to the union of Charles and Marie Williams.  She was educated in the Pittsburgh Public Schools and later moved to Washington, DC where she was also educated, during her teen years.  Aliene returned to Pittsburgh, PA to start a family of her own.

Mrs. Knox left an amazing legacy for her family.  A legacy of strength, intelligence, wisdom, creativity and courage has been bestowed upon her descendants.  She nurtured her daughter, Sandy and several generations of grandchildren a way that she could do best, "with relentless love and devotion."

Aliene, affectionately called "Al or Aunt Al" always left an impression to all who knew her.  She loved and cherished all her family and always stressed the importance of family.  In her words, "Family is all we've got."  Aliene enjoyed participating in family reunions, birthday parties, weddings, and all formas of entertainment.  Family and friends could always count on Aliene to be the "life of the party."  A lover of music and dance, Aliene would always live life to the fullest.  Furthermore, Aliene loved teh Lord and had unwavering faith.

Aliene was preceded in death by her husband, Lonie Knox; daughter, Sandra Knox; parents, Charles and Marie Williams, and five siblings.  She is survived by her granddaughter, Romaine Knox-Chapman of Wilkins Twp., who was a devoted caregiver; two great-grandchildren, Tamika Vaktor of Monroeville and Cameron Hall of Wilmerding; two great-great grandsons, Jordan and David Bowyer of Monroeville; and a host of extended family and friends.