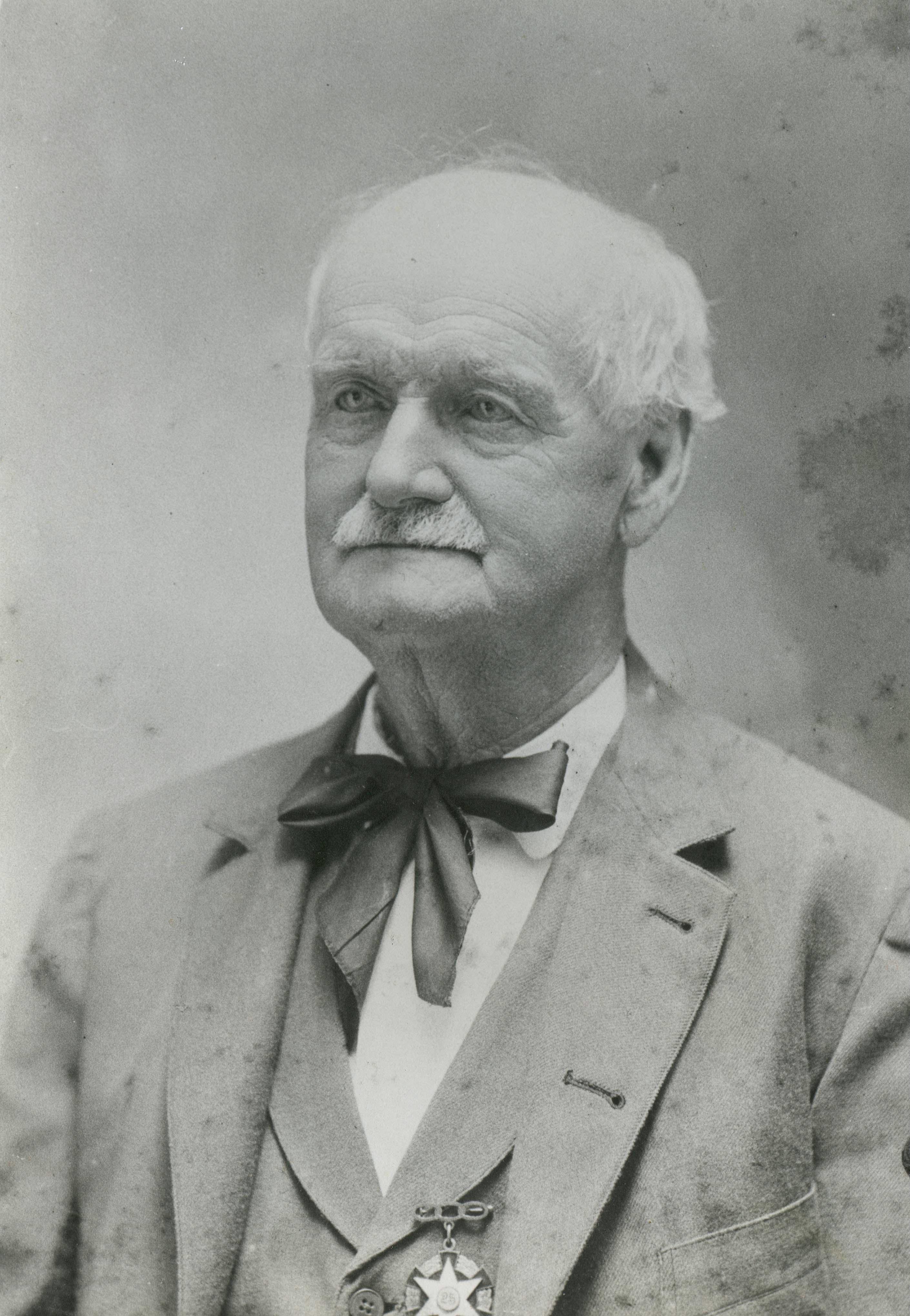 One by one the men of a former generation are passing away. These men who by their strong character, made the early history of the state and laid the foundation of a mighty commonwealth, leaving for their posterity a rich inheritance, in all that is good in government and desirable in material possibilities, will soon be only known in the memory of their achievements and excellency of character.

The youngest of them are in the enjoyment and contentment of ripe old age. They seldom  plan for great things in the distant future, but prefer to live among their fellows in the enjoyment of the confidence and esteem which a useful and active life brings to declining years.

On Sabbath morning, October 13, "Uncle Beatty," as he was lovingly and familiarly known, awoke at a late hour, drank a cup of coffee and again laid back on his pillow and quietly fell asleep; without a struggle or apparently a pain, he began his long and peaceful slumber which knows no awakening until the great day set apart by divine revelation as the time when the dead of the earth shall awake clothed in the beauties of immortality.

James B. Mahaffie was born in Fayette county, Ohio, near Washington court house, April 25, 1817. He was therefore 90 years, 5 months and 18 days old at the time of his death. What a great scope of the country's history that life has covered. A splendid period in which to live.

Mr. Mahaffie early immigrated to Indiana with his parents, living first in Cass county, then in Jasper. During these years young Mahaffie was being developed into a strong character, absorbing those elements which in after years, in the struggles of pioneer life stood him well.

In 1844 Mr. Mahaffie was married to Miss Lucinda Henderson whose loveable and most amiable life mingled with and added to the crowning happiness of both for many long and cherished years, until May 25, 1903, she passed to the great beyond. To this happy union were born the following, who are now living: Mrs. William Julien, W. A. Mahaffie. vice president of the Central C. P. A. organization, Councilman Frank J. Mahaffie, Miss Ella Mahaffie, principal Central school of this city; and Mrs. Samuel Carith-ers of Oklahoma City, John H. Mahaffie of Bedford, Indiana, and Geo. B. Mahaffie of Hobart, Oklahoma.

In 1 857 Mr. Mahaffie came to Johnson county, Kansas, and settled on the Santa Fe Trail, one mile from Olathe. There he kept the first hotel and stage station in that part of the county, where many a weary traveler found comfortable lodging and a generous supply of food. The hospitality of landlord Mahaffie became known far and wide and his love of entertaining at his home ever remained with him. As he was want to pleasantly and invitingly say, that his "latch string always hung out" for the reception of his friends. This hospitable trait sometimes was the cause of embarrassment for the women of his household, for there never was any telling when he would bring some friend or a number of them, for that matter, to dinner, all unannounced, trusting to the never failing resources of his equally hospitable wife to supply the deficiencies caused by his temporary lapse of memory on such occasions. Howbeit, Mr. Mahaffie's table was always a welcome place for any who might come that way, ever generous and obliging.

Coming to Kansas in those early and strenuous days, the subject of this sketch was at once thrown into public affairs and he was Identified with the material interests of the country for nearly fifty years.

In his farming operations he was among the first to realize the value of these western lands and took pride in the products of his own industry. It was from his farm that the first wheat in Johnson county was sold to the then new Washington flouring mill at Wyandotte. That was away back in '59 and his farming in stock raising and growing grain was noted for its thoroughness and efficiency. He took pride in doing things well.

He was a valuable member of the first board of county commissioners and let the contract for the erection of the jail. In his official capacity, he was the embodiment of honor and integrity, ever looking to the interests of the people whom he served. He was conservative yet liberal in providing in his administrative policy. He wanted the county to enjoy those essential things and saw to it that things it was treated fairly in the matter of expenditures.

He had a warm feeling for the old Santa Fe Trail which had been such an important factor in the "commerce of the west." He wanted its winding course across Johnson county preserved, as a mark forever of itself a monument, in silent grandeur. He wanted it unmolested, by the ruthless hand of progress and  deared that the few acres which the great public highway might occupy, should be set apart as a memorial to the men and the days of the olden times. But later the demands for thje land became such,  its winding tracks were covered by the plow of the husbandman, its adjoining acres fenced in, and its course hidden by the advancing hosts who wanted every particle of the public domain for homes.

The thought that the trail itself should be its own lasting monument was a beautiful one and it would indeed have been as grand as it would have been appropriate and picturesque But in this Mr. Mahaffie was over ruled and marble and bronze must suffice to indicate its ancient course, so far as possible and such markings are not always reliable.

Mr. Mahaffie was a man of progressiveness both in thought and action. He was favorable to every enterprise which had for its purpose the development of the county. He was a staunch supporter in the promotion of railroad building and was one of the early advocates of the construction of the old Missouri River, Fort Scott &Gulf railroad and was one of its promoters, serving with ability on the first board of directors.

After many years of happy life on the farm, like so many Johnson county farmers, he came to Olathe to live and enjoy the fruits of his early industry. In 1882, he moved to the city taking up his residence in the house in which he died. In this home he lived all these years surrounded by his friends and neighbors of early days and those of later years. His children administered kindly and lovingly to him in his declining years, ever mindful of his wants and thoughtful of the informities which old age brings. The kindly regard and thoughtful consideration of his children have been lessons in delightful examples to the young of these latter days, who too often are not mindful of the obligations to aged parents and not sensitive to binding filial duties.

The funeral services were held on Wednesday, October 16, 1907, In the First Presbyterian church, Olathe at 2 o'clock p. m., all his children being present except two sons, John and George. The services at the church were especially impressive. Rev. N. A. Shedd, the pastor, officiating. The place of worship was packed with the neighbors and friends of the family, many of those who knew Mr. Mahaffie in the early days were present to pay their tribute of respect to the deceased.

The Odd Fellow lodge of Olathe acted as an escort to the cemetery where the ritualistic services were impressively given by the officers of the order in charge.

Thus closes a long, active and useful life, fraught with deeds of kindness and good will towards his fellows and with a single purpose of mind and heart to do his whole duty faithfully and conscientiously. He was a good citizen and honorable upright gentlemen.

J. B. Mahaffie, known thoughout the county as "Uncle Beattie," died at home in Olathe. He was 90 years old last April and had been a resident of Johnson County for 50 years. He was born in Ohio, but came from Renssalear, Indiana. He was one of the promotoers of the old Missouri, Fort Scott and Gulf railroad and was one of the original board of directors. He death leaves John T. Weaver of Olathe the only surviving member of the original board. (Kansas City Star, October 19, 1907)