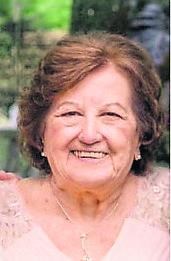 The Life of JOSEPHINE E. HOZZA

Josephine E. (Feichtl) Hozza,90, passed away peacefully on September 22, 2022 at Berks Heim, where she was a resident since May 2021. Married on May 8, 1954, Josie was the loving wife of Deacon John Hozza who passed away on November 17,1992. Born on June 14, 1932 in Lehigh County, Josie was a daughter of the late Adolph and Sophia (Weslock) Feichtl and a graduate of Whitehall High School. A devout Catholic and member of St. Margaret's Roman Catholic Church in Reading, Josie volunteered for over 50 years. She served as a Eucharistic Minister and Cantor, and was involved in Cursillo, Soup Kitchen, RCIA, and Serra Club. She also became employed as the St. Margaret's school librarian where she enjoyed reading to the younger children and encouraging all students' love of reading. Left to cherish her memory are sons: William (Lori) of Colony Park, Timothy (Candice) of Lancaster, John (Karen) of Sinking Spring, Ronald (Laura) of Helotes, TX, and Patrick (Paula) of Scottsdale, AZ; grandchildren: Karen Worrell (Adam), Philip Hozza (Allison), Carlie Hozza (Mark), Phoenix, Nicholas, Jacqueline, Pierson and Parker Hozza; and great grandchildren: Addison Worrell, Zane Hozza, and baby boy Hozza on the way. Also surviving are sisters, Marie DalMaso of Macungie and Kathleen Pompa of Gettysburg; brothers, William Feichtl of Coplay and Joseph Feichtl (Nancy) of Rehoboth, DE; brothers-in-law, Paul (Fern) and Edward Hozza; and sister-in-law, Maryann Janis of Whitehall. Josie also has many loving nieces, nephews, godchildren, cousins and friends. Josie's constant smile, kind heart, and generosity will be truly missed by all who knew her. Her lifelong commitment to family, faith and community will be an inspiration to those she leaves behind. The family would like to thank the nurses, doctors and staff at Country Meadows and Berks Heim for their dedication and wonderful care. A Mass of Christian Burial will be celebrated Friday, September 30th at 11:00am at St. Margaret's RCC, 925 Centre Ave., Reading, PA 19601. Visitation in the church from 9:30am until the time of Mass. In lieu of flowers, memorial contributions may be sent to John Paul II Center for Special Learning, 1092 Welsh Rd. Shillington, PA 19607 or St. Margaret's RCC at the address above. Edward J. Kuhn Funeral Home, Inc, 739 Penn Avenue, West Reading, PA 19611 is in charge of arrangements. Online condolences may be recorded at www.kuhnfuneralhomes.com