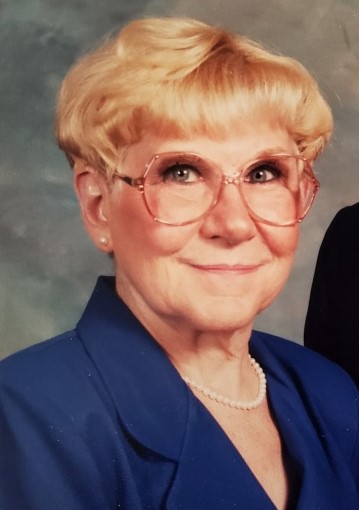 The Life of MARY HELEN WENGER

Mary Helen (Williams) Wenger, 95, formerly of Wyomissing, passed away on Sunday, January 15, 2023 in her daughter’s home in Oley where she resided the past 8 years.  Born on May 9, 1927 in York, she was the daughter of Mary (Little) and Robert Williams.  Known as Helen to her family and friends, she graduated from York Catholic High School in 1945.  She then joined the Cadet Nurses Corps, graduating in 1948 from St. Joseph School of Nursing in Lancaster, PA.  It was there that she met and fell in love with James A. Wenger, of New Holland.  They were married on August 9, 1952 and remained married for 61 years until his death on September 24, 2013.  The couple moved briefly to South Plainfield, NJ where she worked as an Operating Room Nurse at Muhlenberg Hospital.  They then moved permanently to Colony Park for over 50 years.  Together, Helen and James had a large family of five children; Thomas J. Wenger, husband of Deborah (Tanner) of NC, Barbara Jo (Wenger) Good, of Lititz, Sallyann (Wenger) Benfield, wife of Jeffrey L. of Oley, William R. Wenger, husband of Melissa (Shultz) of Stevens, and John A. Wenger, husband of Karine (Faure) of San Diego, CA.  Also, seven grandchildren; Bryan T. Wenger, Lindsay Knight, Samantha M. Wenger, Adam J. Benfield, Jacque A. Wenger, Sebastian C. Wenger, and Lorenzo G. Wenger, and 5 great grandchildren.

Helen was devoted to her Catholic faith and was a parishioner of St. Ignatius Loyola Church in West Lawn.  A survivor of breast cancer, she was proud to participate in the inaugural 1976 class of the Nurses’ Health Study, a long-term study to document women’s health.  To her friends and family, she was always known for her generous and fun loving nature.  Her family will always remember her love of elaborate Christmas celebrations and her fondness of polka music.

In addition to her parents and husband, Helen is preceded in death by her brother, Robert A. Williams.

A Mass of Christian Burial will be held on Saturday, January 21, 2023 at 10:30 am in St. Ignatius Loyola Church, 2600 St. Albans Drive, Reading, PA 19609.  Very Rev. Thomas Bortz to celebrate.  Interment will follow at Gethsemane Cemetery.  Bean Funeral Homes, Sinking Spring is in charge of arrangements and online condolences may be made at www.beanfuneralhomes.com.