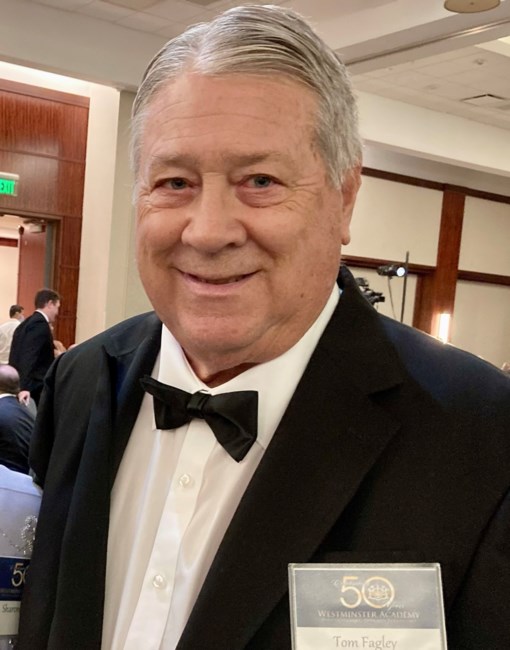 The Life of G. Thomas Fagley

George Thomas Fagley, Jr., (Tom, Dad or Papaw) was born in Philadelphia, PA to George and Ruth Fagley. He was a graduate of Upper Darby (UD) High School (PA) where he played in the band and was president of his high school class all four years. He then earned a degree in mathematics from Ursinus College where he met his wife, Sharon. They married on July 11, 1970. Blessed with four children, Tommy (1972), Mark (1975), Sheri (1978), and Kristen (1981), they resided in Claymont, DE, for 5 years but then moved to Fort Lauderdale, FL, in 1977, where they lived until 2014 when they moved to Stuart, FL.

Tom was a math teacher at his alma mater, UD, for four years; then at Concord High School in Wilmington, DE, for three years. Always searching for additional ways to support his family, he began his swim coaching career as a volunteer timekeeper for Concord High School. After visiting Florida where his sister lived and taught, Tom felt called to teach at Westminster Academy (WA) in Fort Lauderdale, FL. He taught all levels of high school math there, created Camp WA, started the swim team and was head swim coach for 30 years as well as coaching club swimming under the USA Swimming umbrella. In addition, he started a water polo team so his oldest daughter could excel and play in college, established the WA information technology department as its first computer teacher, and became responsible for the hardware and software in the building. During this time, he also started his college teaching career at Broward Community College, where he taught math over 30 years. After moving to Stuart, he taught at Indian River College and also Palm Beach Atlantic University as a part-time adjunct professor.

In addition to math, Tom loved music, the trumpet specifically, Broadway musicals, choirs, bands, and acting. He was Harold Hill in a production of The Music Man at Coral Ridge Presbyterian Church and Bill Sykes in Oliver. Wherever he attended church, he was either singing in the choir or playing his trumpet in a praise band. Even in his later years, he was a member of the Stuart Community Concert Band. “I always think there’s a band, kid!”

Tom was a family man par excellence. When he wasn’t yelling at the Marlins, Phillies, Dolphins, Eagles, Heat, 76ers, Panthers or Flyers, his greatest joy was getting the family together for holiday celebrations and summer vacations. He especially loved taking his 12 grandchildren on his pontoon boat to go tubing, knee boarding or waterskiing. Papaw will be greatly missed.

A follower of Jesus Christ from a young age, Tom served as a deacon or elder in each church he attended. He loved his Lord and showed that love to others, to his wife, his children, his grandchildren, his students, his friends, his co-workers, his neighbors. Throughout his life, he was known for using his humor and silly antics to make everyone feel comfortable and loved. If you were in Tom’s circle, you were forever in his circle. No one was ever forgotten or dismissed; more were always being added day by day, year by year.

A memorial service will be held at 2:00 pm on Saturday, October 1, 2022, at Treasure Coast Presbyterian Church, 203 SW 3rd Street, Stuart, FL 34994. The service will also be live-streamed through the church's website or You Tube page .