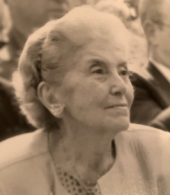 The Life of Seta K. Demurjian

Seta Kazazian Demurjian, passed away Monday afternoon, February 24, 2020, in her sleep. She lived until she was six weeks shy of 88. Seta was a vivacious, feisty woman for the first 86 of those years, but declined precipitously - both physically and mentally - over the past two years. She passed peacefully while napping on her couch, in her home, which is how she wanted to go.

Seta lived life on her own terms, often without a filter. She inspired many with her independence, her generosity, and her zest for life. She was fluent in four languages, teaching Italian almost until the day she died and conducting foreign language tours (in Italian, French, and Spanish) of Philadelphia and even DC well into her Eighties. Seta was also a true patron of the Arts, as an active subscriber to the Philadelphia Orchestra and Metropolitan Opera, among others, up until this last year or two.

She will be sorely missed, especially by Malcolm, her husband of 64 years, her son Stuart, her son Warren and his wife Amy, her grandchildren Aubrey and Teddy, and her sister Myri Norcen and her husband Mario. She is also survived by her loving niece LindaCarol and her loving nephews Harry, Luca, Claudio, Richard, David, and Michael.

She lived a great life. It was simply her time. Seta's life will be celebrated in services to be announced once they are finalized. In lieu of flowers, donations in her name will be gratefully received by the Philadelphia Orchestra https://www.philorch.org/donate/#/levels/ or Natural Lands Trust https://natlands.org/support/more-ways-to-support/commemorative-gifts/