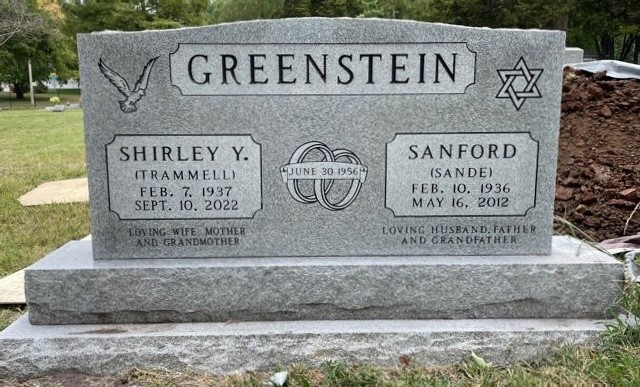 The Life of Shirley Yvonne Greenstein

Shirley Yvonne Greenstein, 85, of Olathe, Kansas passed away September 10, 2022 peacefully at home, surrounded by her family.
Shirley was born on February 7, 1937 in Spring Hill, Kansas to the late David Floyd Trammell and Mary Ann (Plank) Trammell. She was the fourth born of five children. She grew up in Spring Hill and Olathe where she attended school. In 1955, Shirley was working as a waitress when she met the love of her life, Sanford Greenstein. They married and she began traveling with him all over the world while he served in the Air Force and they raised a family together. Shirley and Sanford had 2 sons that she stayed home with and raised. After Sanford retired from the military in 1977, they traveled for a short time and then finally settled in Olathe and built their forever home, where she lived until her passing. This was their fi rst permanent home since they got married, more than 20years earlier. They were married for 66 years in June. Shirley enjoyed gardening, quilting, bakingand spending time with her grandchildren and great grandchildren.
Shirley was preceded in death by her husband, Sanford; brothers: Don and Gene Trammell; andsister, Marietta Trammell. Survivors include her two sons: Dennis Greenstein and wife Michelle and Terry Greenstein andwife Barbara; sister, Sharon Neal; 5 grandchildren; and 9 great grandchildren.
Graveside service will be Saturday, September 17, 2022 at 10:00am at Olathe MemorialCemetery, 730 N Chestnut St., Olathe, KS 66061.