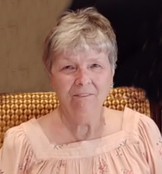 The Life of Jamie B Johnston

Born in Detroit, she was raised in Southwest Philadelphia and was a June 1961 graduate of John Bartram HS. A longtime resident of Drexel Hill, she was active in her daughters’ activities including Girl Scout Troop leader, the Aronimink Home and School Association, the Upper Darby Choral Music Association and was a member of St. James United Church of Christ.

After retiring from the Philadelphia Visitors Center as Event Co-ordinator, she worked at the Granite Run JC Penney Store. She also served as an Administrative Assistant at the Philadelphia Chamber of Commerce. Jamie enjoyed spending time with her family, especially cheering on her six grandchildren.

She opened her heart to countless numbers of “her kids”, offering a sympathetic ear, a warm meal or a neighborhood celebration. Creative endeavors, including knitting and quilting allowed her to express her creative side, brought her immeasurable pleasure and allowed her to build long-lasting friendships.  Her generous heart and selfless nature drew her to volunteerism, most recently with Loaves and Fishes Food Pantry.  She was the cherished wife of the late Robert T. "Bobby" who died in 2010 and sister of the late Cindy Holland. Mother of Dawn (Timothy) Madden, Cheryl Johnston Chapman, Jennifer (Chris) Rieben; she is also survived by her sister, Martha Baker; sister-in-law, Ellen Bisaccia; and grandchildren James (Teresa) Madden, Alison Chapman, Daniel Chapman (fiancée Emily Tinson), Carter Rieben, Christopher Rieben and Corinne Rieben.

Filter Jamie B Johnston's Timeline by the following Memory Categories