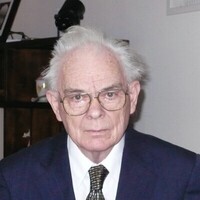 The Life of Harold T Smallwood

Age 93 years, of Collegeville, PA. formerly of Media, PA. passed away at his home on August 2, 2022.  Mr. Smallwood was born in Upland, PA. and made his home in Media, PA. for 48 years. He moved to Collegeville in 2008 where he resided for 13 years.  Harold graduated from the old Eddystone High School, and later studied Chemical Engineering at Lehigh University.  He served in the U.S. ARMY 1951 - 1953 with an honorable discharge at the rank of corporal.

Mr. Smallwood's work career began in 1957 with American Viscose as a product development engineer. He stayed with the company until 1970. He later joined Sentry Paint as a Paint Chemist from 1976 - 2000.  In his younger years he was an active member of Upland Methodist Church. Harold had many interests including woodworking, camping, enjoying movies and he had a fondness for history including being an avid reader of historical novels.

Mr. Smallwood was the son of the late Harold and Mary Lynch Smallwood. He was predeceased by his wife of 55 years Hildrith Maxine Smallwood.  He is survived by his 2 daughters Angela M. Smallwood (Robert C. Bruckner)  of Collegeville, PA. and Linda K. Reinert (Gregory Reinert) of Antrim, NH. his granddaughter Caroline A. Casassa (Bruce Dan Casassa) and his great grandson Bruce James Casassa.  He is also survived by a close family friend Sandra Heimbach of Easton, PA.

Funeral service will be Wednesday (August 10, 2022)  11:00 AM at The Rigby Harting & Hagan Funeral Home  15 E. Fourth St. Media, PA where friends and family may call after 10:00 AM.  Burial will follow at The Arlington Cemetery in Drexel Hill, PA.  Contributions to Cat Angel Network  P.O. Box 3071  Stowe, PA. would be appreciated.