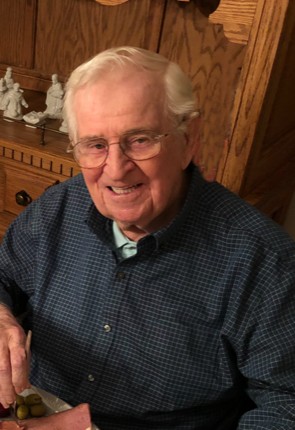 The Life of Joseph K Anderson

Joseph K. Anderson Jr., 96, of Collingdale, on July 25, 2022.  Born and raised in Philadelphia, Joe attended Bartram High before enlisting in the US Navy. He served as a Fire Controlman on L.S.T. 694 during WWII in the South Pacific. Following his discharge, he attended Spring Garden College to study electrical engineering.  Joe worked at the Atlantic Refinery (later ARCO and BP Oil).  He was the ultimate handyman and could fix anything that broke in the home he shared with his family.  He had been a Member of  First Lutheran Church of Collingdale.  He was a dedicated fan of both the Phillies and Eagles. Joe was an avid reader, particularly studying archeology and nature.  What will be remembered most was his devotion to family as a loving husband, dad and Pop-Pop.

He was the husband of the late Claire and father of the late Joseph S.  Survivors include his daughters, Gail (Jay) Tress, Donna (Pete) Lunny,  Karen (Kevin) McCormick,  Nancy (John) McCullough, daughter in law Margaret Mary Anderson, 16 grandchildren and 7 great-grandchildren. Funeral Service will be 11 am Saturday, July 30th at the Toppitzer Funeral Home at Arlington where visitation begins at 10 am.