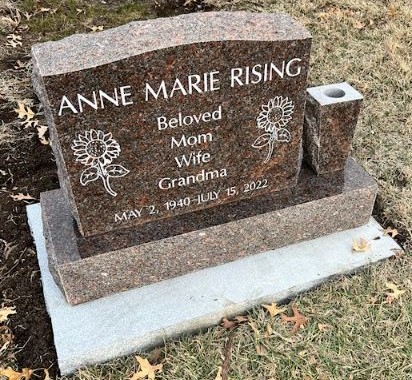 The Life of Anne Marie Rising

Anne Marie Rising, age 82, passed away July 15, 2022, after a courageous battle with cancer. She was born May 2, 1940, in Atlanta, KS to Ray Jennings Deterding and Inez Mae (Smith) Deterding. She graduated from Atlanta High School in 1958 and attended the University of Kansas where she met Donald B. Pishny (deceased) and married February 14, 1959. For many years she was a devoted mother to her four children before returning to school to complete her bachelor’s degree in Elementary Education from Wichita State University in 1976. Instead of becoming a teacher she spent the next 28 years working in banking before retiring in 2005. She cared for others and always had a smile or a kind word. She listened and asked questions and you knew she could always be counted on to do the right thing. She truly loved life. She enjoyed simple pleasures; chatting with friends and family, playing games, traveling, music and animals, especially cats. She is survived by her second husband, Richard Rising, her children, Teresa Johnston (Bill), Jeff Pishny, Dan Pishny (Julie), and Laurie Kessler (Bob), grandchildren, Chris Oldham, Erin Pishny Dollinger
(Aaron), Ryan Pishny, Evan Johnston, Max Pishny, and Ben Pishny, her life long friend Barbara Van Alstine, several brother and sister in-laws, cousins, nieces and nephew and step-children, step-grandchildren and step-great-grandchildren. Family and friends whose lives Anne touched are invited to attend her celebration of life on Thursday, July 21st at 11:00 AM at the Shawnee United Methodist Church, Johnson Drive, Shawnee, KS followed by a burial in Olathe Memorial Cemetery. Lunch and reception to follow at Grand Street Café, 8815 Renner Blvd, Lenexa, KS 66219 at 1:00 PM. If desired, flowers can be sent to the church or memorial contributions to a charity of your choice, keeping in mind some of Anne’s favorite things were nature, birds, and animals.