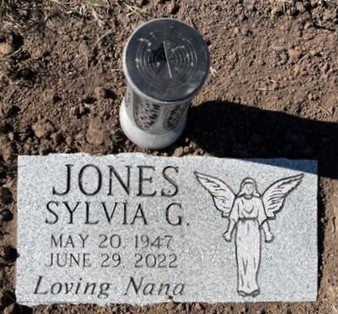 The Life of Sylvia Georgene Jones

Sylvia grew up in the Gardner/Edgerton area, graduating from Desoto High School in 1965. Her first daughter was born later that same year, and her second daughter was born 2 years later. She worked as a waitress until 1986 when she began a custodial job at Johnson County Community College, where she stayed until retirement. Sylvia enjoyed reading, puzzle books, and babies. She never met a stranger, and boasted a large extended family. Her door was always open.

Sylvia is preceded in death by her parents, George Collins and Shirley White, and her husband Charles Jones.

A Celebration of Life will be held on July 6, 2022 at 2:00pm, at Penwell Gabel’s Olathe Chapel with burial following at the Olathe Memorial Cemetery.