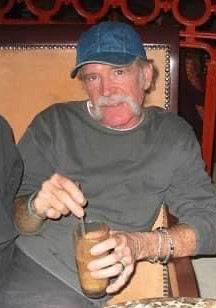 The Life of James W. Scholl

James W Scholl passed away on June 14th, 2022 in the Lutheran Home at Topton where he resided for less than two months.  Prior to that, he spent his days at home in the house he built and on the property he has loved and maintained for the past 44 years.

Jim was born in Allentown, Pa March 10, 1947 to James H. and Violet A. Scholl and was a graduate of William Allen High School, class of 1965.  After serving time in the Army during the Vietnam war, he began working at Sorcerer's Apprentice and shortly after started his own business as a silversmith and goldsmith where he designed, crafted and sold custom jewelry of all sorts for about 20 years.

Jim's passion was traveling. His annual travels started by heading south, usually ending up in Key West, Florida, where he learned to weave palm leaves into baskets, hats and roses for tourists. He then began going even farther south to Central America, mostly Costa Rica and Panama, where he would backpack to remote places, sleep on beaches, explore and befriend the "locals" for about half of each year for about 25 years, the other half of each year being spent at home with his family and friends.  Another love was riding his Harley. He was a life member of the Reading Motorcycle Club where he spent many years and made countless friends that he valued greatly.  He was also an avid music and movie lover and was known and loved for his free spirit and adventurous attitude. Jim had a very full life that was exceptionally well lived.

Jim married Nancy J Silberman and raised 2 children, Peter Scholl and Sundena Kate Haas (Scholl). He is survived by his son and daughter, son-in-law Nicholas Haas, granddaughter Kaylee, grandsons Davin and Connor, brother William, sister-in-law Paula and nephew Ben.  The family will celebrate his life with reminiscence gatherings to be arranged at a later time.

Dear Peter and Sundena,  Your Dad was such an amazing man. He lived his life to the fullest! He was a gentleman and more importantly a gentle man! Love Aunt Penny and Uncle Dennis