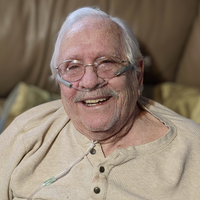 The Life of DAVID RYLIE COFFMAN

David Riley Coffman, 82, of N. Platte Nebraska passed away May 16, 2022 at Centennial Park Retirement Village in the arms of his loving wife, Alicia.   He was born September 23, 1939 to Cecil and Lucille (Morford) Coffman in Des Moines, Iowa.

David was an ornery and feisty boy, whose spirit was suited for adventure. It was these personality traits that called David to join the Marines in 1958.  After three years in the Marines, David knew he was ready to settle down, get married, and start a family. Luckily for him, there was a woman wild enough to make that happen. David Coffman and Alicia Neff were married in 1961. The two of them went on to make a beautiful family that started with the birth of their first son, William (Theresa) Coffman. William himself served our country, following in the footsteps of his father. He then went on to raise a family of 6. Next to come along was Katheleen Roe. Kathy has 6 children, with 1 headed to serve our country this year, also following in the footsteps of his grandpa. Shawn (Kellany) Coffman was the third child born between David and Alicia. He went on to have 3 children.  Next, Theresa Ramirez, started a family as well. She went on to bring 4 children into the Coffman family. Last, but certainly not least, Tylar and Michael Coffman finish up the family for David and Alicia. Love never ran short for the Coffman family, and that’s why there are 19 grandchildren and 67 great grandchildren. All of whom are loved and adored. David is proceeded in death by his mother, Lucille Morford, and father, Cecil Coffman.  David spent his married years working for The City of Des Moines, Iowa Forest Dept as an arborist. After retiring from this position, he went on to be an independent long-haul trucker. His children fondly remember adventures in his semi, and getting to camp out in the back sleeper. There never was a dull moment if you had the gift of having David in your life. He also enjoyed teaching his children how to get their hands dirty, working on his favorite possessions… his bikes and trucks. Not only did you laugh a lot if David was in your life, but you also knew how to change your own oil.

Memorial services for David will be held in Iowa at a later date.  Adams & Swanson Funeral Home is in charge of local arrangements.