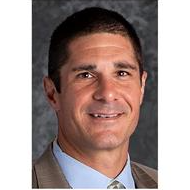 Dr. John Edward Ernst, 44, Olathe, KS, passed away June 13, of complications of Neuroendocrine Cancer. John was born in Prairie du Chien, Wisconsin on January 19, 1978 to Jim & Kathy Ketelsen Ernst. John grew up in Monona, IA and attended MFL MarMac through high school. He spent his free time playing football, basketball, golf, track & field, hunting, and lifeguarding at the Monona Pool, which covers 95% of the activities available to one living in Monona. John continued his football career at Coe College in Cedar Rapids, IA as he graduated with a BA in Elementary Education. While in Cedar Rapids, his cousins there fondly  remember his wonderment at living in the “big city” of 150,00 people. The school is also the alma mater of his dad, uncle, and sister. While teaching 4th grade in Desoto, IA for ADM, John at an Iowa State football game met Heidi Ann Hilleman, the beautiful and energetic woman he would follow to Kansas City. John & Heidi loved & supported each other for nearly two decades, marrying on July 31, 2004 in Kansas City. John and Heidi made their home in Olathe, KS. They welcomed a son Joseph Michael in 2007, and a daughter Carlie Elizabeth in 2009. Family was of the utmost importance to John. He generously considered coworkers and neighbors part of his family. The mutual love and dedication between John and his family was present before and throughout his courageous fight with neuroendocrine cancer.Education was his vocation and passion, earning a MA in Educational Administration (2005) and a Ph. D in Educational Leadership and Administration (2015) from Baker University. John held multiple roles in education over 15 years, most recently the principal of Rolling Ridge Elementary School in the Olathe Public School District. In 2016, John was awarded the National Distinguished Principal of the Year award by the Kansas Chapter of the National Association of Elementary School Principals. John was recognized as a Wall of Honor Inductee by Baker University in 2017. John was also honored to be in the Leadership Olathe Class of 2017. John was known for his relationship building with students and staff. He enjoyed greeting kids at the beginning and
end of each day as they entered the school. He insisted on learning the names of 400+ students in the first week of school. He spent lunchtimes in the cafeteria and scraped icy windshields of staff in the winter. John’s commitment to “service over self” was visible throughout all areas of John’s personal and professional life. Even as he battled cancer and the exhausting treatments, he was motivated to be present for and serving those around him. John’s enjoyment of being outdoors continued into his adult life, and he loved sharing this joy with others. Boating and water skiing on the lake with family and friends was always something he cherished. He looked forward to snow skiing trips in Copper Mountain with friends that became family as well, watching the skills of the kids progress as they got older. He coached or assisted with countless youth sports teams, passing on his knowledge and love of the games. He took his children hunting and fishing and loved telling stories of what they experienced. John’s dedication to a positive attitude regardless of what life threw at him by “Never Saying Quit” and being “ErnstStrong” motivated him and everyone who encountered his story. To say that he was an inspiration would be a vast understatement. The world is a better place because John Ernst was a part of it for 44 short years. John is survived by his wife Heidi, his son Joseph and daughter Carlie, all of Olathe, Kansas; his parents Jim and Kathy Ernst of Gardner, KS; his sister Amy Muessel (Dan) and their children Alexandra and Luke of Omaha, NE; his Father
and Mother-in-law Mike & Sharon Hilleman; his Sister-in-law Christie Hilleman Hocamp (Paul) and their children Michael and Mya; his Brother-in-law Scott Hilleman & Courtney Hilleman and their children Taylor & Hudson; his adored aunts and uncles; his beloved cousins; and an entire neighborhood and community of families who loved him. John was preceded in death by his grandparents, Ardel & Marcella Ernst and John & Marjorie Ketelsen; his uncle Jack Ketelsen; his cousin Jill Davis.