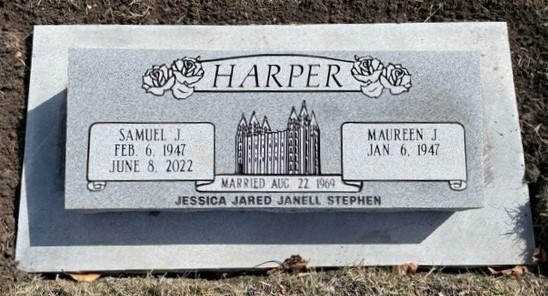 The Life of Samuel J Harper

Samuel J Harper, 75, of Olathe, Kansas, passed away on Wednesday, June 8, 2022. He was born on February 6, 1947 in Blackfoot, Idaho to Marvin and Opal (Jackman) Harper.Sam grew up on a farm in Rose, ID. He was the youngest of 7 children. Sam served a two and a half year mission in Taiwan for The Church of Jesus Christ of Latter-Day Saints. When he returned, he attended BYU where he met the love of his life, Maureen Call. They married August 22, 1969. Sam graduated from BYU with his MBA. He, Maureen, and their newborn daughter moved to Ohio, where their first son was born. From there, the family spent a short time in Massachusetts, before moving to Georgia, where another daughter and son completed the family. Sam’s job moved the family to Illinois for about a year. In the spring of 1985, the family moved to Kansas where they still reside. Sam was a loving son, brother, husband, father, and grandfather. He was a good friend to many and served his church faithfully. He loved most sports, but his heart belonged to baseball, especially the Atlanta Braves. Most family dinners ended with Sam discussing sports with his son and grandsons (his daughters liked to put their 2 cents in as well). Sam loved spending time with his kids and he adored his grandkids. He was happiest when he was with his family.Sam is survived by his loving wife, Maureen Call Harper; children Jessica Harper Brandes, Jared Harper (Renee), Janell Harper NeSmith (Chris), and Stephen Harper (Ashley); brothers and sisters, Robert Harper, Kathryn Wood, Bernice Palmer, and Walter Harper; grandchildren, Michael Brandes, Joshua Brandes, Caleb Brandes, Sara Brandes, Hannah Brandes, Lily Harper, Liam Harper, Owen NeSmith, Isaac NeSmith, Avery NeSmith, and Eli NeSmith; as well as many nieces and nephews.He was preceded in death by his parents Marvin and Opal Harper; his sister Carol Pendlebury; his brother John (Jack) Harper; his son-in-law, Bradley Brandes; and his grandson Jacob BrandesThe family will receive guests for a visitation at 10:00am on Wednesday, June 15, 2022, at The Church of Jesus Christ of Latter-day Saints, 21515 W 101st St, Lenexa, KS 66220, with the service following at 11:00am. Burial will be in Olathe Memorial Cemetery, 730 N Chestnut St, Olathe, KS 66061.