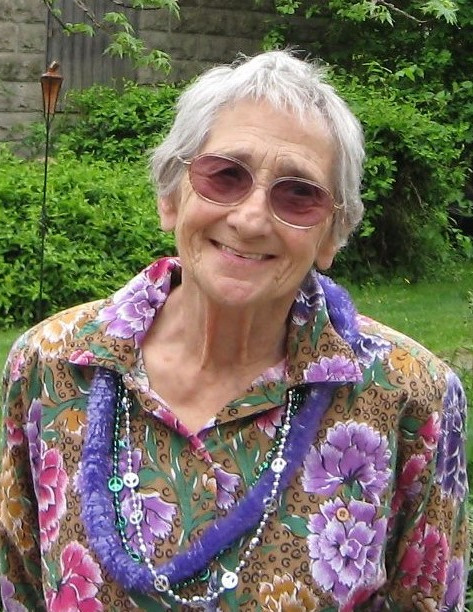 The Life of Edith Bell

On Sunday, May 22, 2022, Edith Bell died peacefully in her sleep. No power could stop the force of nature that was Edith, not a world war, a global pandemic, or a bad back. At 98, she decided she was ready to go and just stepped out. She left behind a world that she spent her whole life fighting to make a better place, as well as an army of friends and family who she inspired to keep up the work. She passed peacefully in her apartment in Pittsburgh, PA, after seeing her family and closest friends for the last time. She was laughing and joking until the end. Her passing was “quiet and seemingly deliberate, just like she was a lot in life. Except when she was singing anti-war songs at protests with the Raging Grannies.  Then she was loud and deliberate.”

Edith grew up in Hamburg and Amsterdam, survived Nazi death camps where both her parents died, lived in Israel and Panama, and then moved to the U.S. with her husband, Sid. She used the terrors she faced in early life to fuel her political activism, marching for civil rights in Wisconsin, fighting for peace and justice in West Virginia and then in Pittsburgh where she developed strong bonds at the Thomas Merton Center, WILPF, Stop Banking the Bomb, and closest to her heart, the Raging Grannies who were there with her until the very end of her life.

When people would ask if she really thought that we could accomplish great change, she would say “I don’t know…but when I leave this world, I want to do so knowing that I did everything I could. No one can say I didn’t do my part.” The impact that Edith had on her family, friends, and the communities she was a part of is endless, for she was a guiding light of optimism and chutzpah for all.  The inhumanity she endured in her early years drove her to fight for peace and the freedom of others, and she never wavered. Even during an interview near the end of her life she drove home the need for peace in the world saying "The only ones who profit from war are those who make the bombs.” There was not a person in her life whom she did not instill with her determination to stand up against injustice. She now leaves that legacy to her children, Alice & Danny, her grandchildren, Jackson, Nolan & Vera, the rest of her immediate family Stuart, Scott, & Tracy, her extended family in Israel, and her friends throughout the world.

Edith was buried, without ceremony, in a green burial she planned for herself. Those who want to remember her will be able to take a hike, or sit on a bench in the woods, as she loved to do throughout her life, at Penn Forest Natural Burial Park.

In lieu of flowers, folks are welcome to contribute to some of the causes that meant to most to her:

Instead of a memorial, we plan to invite all those who loved her to celebrate her life, later this summer.  Time and place will be announced as we plan a party she would have loved with all of you.