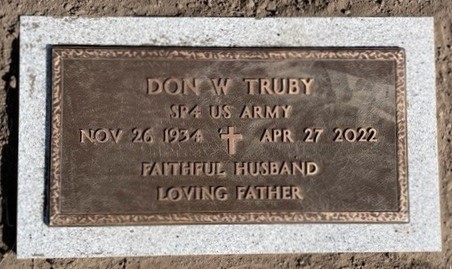 The Life of Don Winton Truby

Don Winton Truby, 87, of Olathe, Kansas, passed away on Wednesday, April 27, 2022. He was born on November 26, 1934 in Wichita, Kansas to Victor and Ruth (Secrest) Truby.Don grew up in Anthony, Kansas and attended all 12 grades of school there. Don was in the armed forces as part of the Army and served his time in Germany for 2 years. Don was very proud to serve his country and always enjoyed telling the young children and teenagers his experiences. When he returned home from the service he was hired by John Deere and moved to Kansas City. When passing by a church on his way to the hotel where he was staying, he wrote the number down and went to church that evening where he met the Love of his Life, Linda, and they were married in August, 1962. Don was transferred to Oklahoma City and spent a year traveling to troubleshoot any problems that the farmers might find while using their product in the wheat fields and other places. Don did not like the traveling and moved back to Kansas City where he was offered a job with NAPA, a parts distribution company, where he became a supervisor of the Jobber Service Department where he talked to the managers of the stores associated with the company to find out their needs for their customers.His love for music was his greatest hobby and he was a very accomplished steel guitar player and played for many groups and for church services. He also started a youth choir at the church where he and his wife attended. God blessed those young people and their talents. Many are in the service of their Lord and Savior. Some are even working in other countries doing various ministries for the Lord.Don never lost his love for those young people nor the music he loved to play on his steel guitar whenever he had a chance. I'm sure he has already joined the band in Heaven to play the songs of praise to God.Don is survived by his loving wife of 59 years, Linda; brothers, Robert (Marilyn) Truby and Phil (Jan) Truby; as well as several nieces and nephews.He was preceded in death by his daughter, Alisha Truby; his sister, Nancy Truby Krhut; and his parents, Victor and Ruth Truby.A graveside service will be held on Monday, May 9, 2022, at 1:00pm in Olathe, KS.