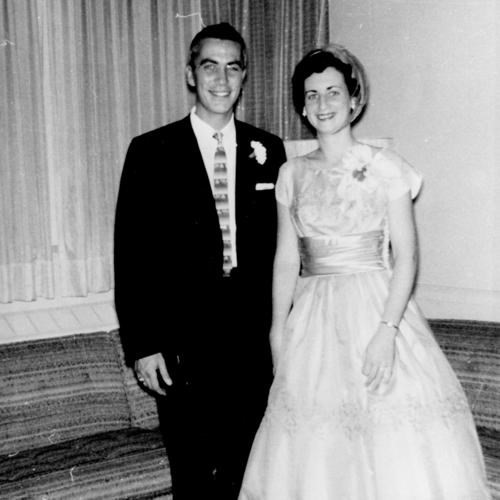 The Life of Patricia Anne Brown

After 70 years together, almost 65 of those married, Fred and Patricia Brown died in Asheville, North Carolina within three weeks of each other; Fred on March 19, 2022 and Pat on April 9, 2022. Fred Harry Brown was born to Frederick W. and Mildred V. (Silberman) Brown on November 8, 1930 and was an only child; an older sister, Rose, died as an infant. Patricia Anne (Lamay) Brown was born to Urban R. and Margaret M. (Fox) Lamay on March 15, 1932 and was the 2nd of 7 children. Both Fred and Pat grew up in Upper Darby and Drexel Hill, Pennsylvania where Fred graduated from Upper Darby High School and Pat from the Catholic Diocese of Philadelphia school system.Fred entered the United States Air Force in 1948 and served as a ground crew chief and flight engineer until honorably discharged in 1952; Staff Sergeant Brown was last assigned to Webb Air Force Base in Big Spring, Texas. After separating from the military Fred attended Drexel Institute of Technology where he obtained his Bachelor's degree in Mechanical Engineering. After a year at Chestnut Hill College, Pat worked for Provident Mutual Life Insurance Company and then for Rohm and Haas Chemical Company until their marriage. With Fred starting work in the aircraft and aerospace fields with General Electric, the couple were married in Fort Wayne, Indiana on August 28, 1957.Fred's work soon took the couple to Massachusetts where their 3 children were born: Fred, Jr. in 1958; Mark in 1959; and Patrice in 1960. The young family followed Fred's work which eventually brought them to Tewksbury, Massachusetts in 1964 when he obtained a position with Avco. Fred completed his Master's degree in Mechanical Engineering from Northeastern University in 1966. Pat became the Parish Secretary to St. Anne's Episcopal Church in Lowell, Massachusetts and stayed in that position for fourteen years. Her next interests were voluntary positions in helping to feed the hungry and to house the homeless. Pat supported the establishment of the House of Hope in Lowell. After Fred's retirement they moved into Deerfield Episcopal Retirement Community in Asheville, NC in 2004. The family is extremely grateful for the loving care Deerfield staff provided Pat and Fred, especially during their final months and days.Pat and Fred continued their volunteer work in the Deerfield community and enjoyed traveling in their retirement years; they enjoyed life together. The last days of their lives were filled with the joy of seeing grandchildren and great-grandchildren, to include their newest great-granddaughter and learning the name of a new great-granddaughter to be born in August 2022.Pat is survived by siblings: Marie S. Pinto; Constance J. Fohner, and husband Charles (Buck); Daniel V. Lamay, and wife Karen. Three of her siblings had pre-deceased her, Margaret M. McMenamin; Urban R. Lamay, Jr.; and Robert R. Lamay. Many nieces and nephews also survive her.Pat and Fred are survived by their three children. Dr. Fred H. Brown, Jr. and his wife Dolores, and Fred, Jr.'s three children: Concepcion Harris and husband Scott; Matthias; and Magdalena Funk and husband Christian. Mark D. Brown and wife Diane (deceased in 2020), and their 2 sons: Mark N. Brown and his wife Kimberly; and Robert Brown and his wife Jessie. Patrice M. Currie and husband Steve. Pat and Fred were blessed with great-grandchildren: Gabriel, Mariam and Margaret Harris; Harrison and Harlow Brown; and Sophia Brown.Interment will be at Arlington Cemetery in Drexel Hill, PA on May 14, 2022. In lieu of flowers the family would prefer donations be made to Episcopal Relief and Development (www.episcopalrelief.org) or the House of Hope (houseofhopelowell.org).