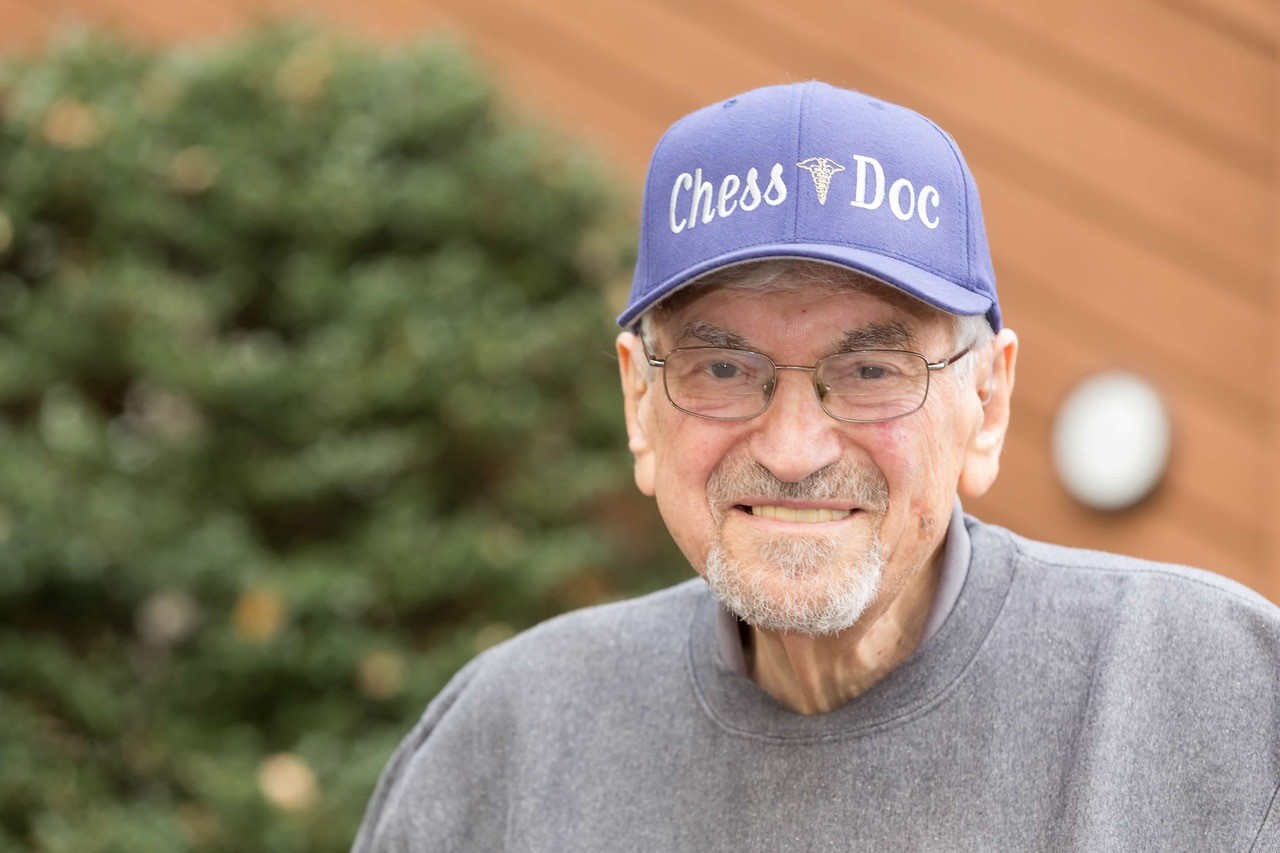 The Life of Albert Seymour Heyman

Albert Seymour Heyman, the good-natured, steadfast patriarch of the Heyman clan, died in his sleep on Tuesday, January 11th, at the age of 98.

During his many decades on earth, Albert survived sixty-three years of secondhand smoke from his wife Freda, triple bypass surgery, and five rowdy children.

How he lived to age 98 is a mystery, as Albert’s idea of exercise was turning pages in a book. But those closest to him believe the secret to his longevity was his avoidance of alcohol, love of chess, and unflappable demeanor. Mentally sharp to the end, he destroyed a 20-year-old chess opponent just days before he died.

Albert grew up in the Bedford-Stuyvesant section of Brooklyn with his parents, two brothers (Jack and Arnold), and a sister (Rosalyn). He remembered himself as an extremely shy kid with no friends, but wasn’t particularly troubled by it. He enjoyed tinkering with things and reading on his own. As a teenager at Boys High School in Brooklyn, he expressed aspirations of becoming a lawyer. His mother suggested that since he never spoke, perhaps medicine instead.

In 1940, Albert entered Brooklyn College at a time when the country was embroiled in the Second World War. Doctors were in high demand, making it possible for Albert to finish his premed requirements and gain acceptance to Philadelphia College Of Osteopathic Medicine (PCOM) after just two years. The War also impacted the length of his med school curriculum, compressing four years’ worth of learning into three. As a result, Albert graduated from PCOM in 1945, a newly minted physician, barely 22 years old.

As someone who loved to tinker, surgery fit Albert like Cinderella’s glass slipper. He did his surgical training at Flint General Hospital in Flint, Michigan and afterwards stayed on staff. In 1958 he met Freda, a 25-year-old female resident with strong feminist opinions and bright red hair. He was instantly smitten and they married six weeks later. After Freda finished her own medical internship, the couple moved to Howard Beach, New York to put down roots and start a family. Albert and Freda had four children in four years: David, Lori, Steven, and Robin. They rested a bit and then had one more: Terry.

By this time, the family had moved to Woodmere, New York, and Albert had established his surgery practice in several area hospitals, but mainly Interboro Hospital in Brooklyn (later Baptist Medical Center) where he was Chief of Surgery. As a general surgeon, Albert did everything including appendectomies, lumpectomies, cholecystectomies, bowel resections, and more. He once unknowingly operated on a mobster, saving his life, and for years after, in certain restaurants in Brooklyn his money was no good.

Working long hours, Albert left the bulk of the childrearing to Freda, but he was a constant reassuring presence in the home. The kids’ bedtime ritual entailed four kids hanging on to each of Albert’s four limbs, the youngest in his hands, while he climbed the stairs to tuck the kids into bed. On Sunday mornings he’d take the kids out for a bike ride or to an amusement park or bowling alley to give Freda peace and quiet.

It was a busy life—five active children, neverending school concerts and plays, exotic vacations to India, Colombia, Egypt, among other places, often not in the most comfortable surroundings. But Albert happily went along for the adventure, never once complaining. If Freda was the wind powering the family’s sails, Albert was the ballast providing balance and stability.

Albert was a lifelong learner. In his 60s, an age when most men think about retirement, he flew to Texas to learn laparoscopic surgery. He loved it and said it felt like playing a video game. While he never pushed his children into any specific career path, both his sons followed him into the profession. He’d tell them, “It’s important to know when to operate. But it's equally important to know when NOT to operate.” His was a carefully considered approach to medicine.

In 1999, Albert and Freda left New York and moved to Bucks County, Pennsylvania. In his retirement, Albert indulged his passion for chess and played regularly with fellow chess enthusiasts at the Doylestown Starbucks. He took classes at Delaware Valley University to learn about history and anything else that captured his interest. When he wasn’t in class, he’d be at home reading the latest Tom Clancy novel, taking notes on his bookmark to keep the multiple characters and storylines straight.

On his 90th birthday, Albert announced that going forward, he only wanted to celebrate his birthday every ten years. A realist about life, he did not shy away from talking about his own death. When asked where he wanted to be buried, he replied, “Surprise me.”

Albert was a man of contradictions. An introvert, content to read for hours, yet equally comfortable giving humorous speeches at family events. Humble, yet a highly respected surgeon whose skilled hands saved countless New Yorkers from living with a colostomy bag. The same hands that could expertly stitch together two sections of a large intestine would readily make sewing repairs on his teenage daughter’s handbag. A practical man, he told his children, “Never order corned beef in a Chinese restaurant.” Sound advice.

After Freda died in October, 2020, Albert moved to The Pinnacle, a senior living community in Plymouth Meeting, PA. He was their oldest resident and participated in every activity with the exception of yoga (“too much woo woo and waving my arms around”). He routinely won at bingo, enjoyed the poker games, and got the Gold Medal in the Pinnacle Olympics for receiving the highest score in the trivia contest. His final months were filled with visits from his children, grandchildren, and the friends he made at The Pinnacle.

Albert leaves behind five children, twelve grandchildren, and twenty-five books on chess. His children will remember him as the kindest soul, hardworking and loyal to the end. He will be greatly missed.

Donations in Albert's memory can be made to The Aiden Snyder Pediatric Brain Cancer Foundation, created in remembrance of Aiden Snyder, Albert's great grandnephew:

Mr. Heyman, you will forever be in my heart. You are a beautiful man! Thank you for being so kind in every encounter we shared. Rest peacefully.

While a chessmate of Albert's for a number of years, I admired his wit, intelligence, tenacity, and always friendly demeanor, and was happy to attend his 95th birthday party.  My wife and I ran into Albert and Freda once at a Doylestown rummage sale.  Freda enthusiastically spoke of her love of motorcyles then proceeded to rummage through the junque while Albert happily sat next to a few tables of books, engrossed in one of them.  I miss playing chess with him; he was a pleasure to know.

I will remember Albert as the kind, quiet, gentle man who was always happy & pleasant.  Rest in peace.

It is said, a man is judged by his actions over a lifetime, yet there are so many echos of him that carry forward that he would never know. I never actually knew Dr Heyman, yet I have had the pleasure of knowing his daughter, Robin for the last 20 plus years. Robin has been my emplyee, friend, confidant and fellow traveler on this path of life. She is clearly the daughter of her surgeon father. Robin has his obsessive focus on detail, tenacious nature to make sure patients get good care and a steadfast moral compass that never strays from the focus of making sure patients are always properly cared for. When her family or patients are in distress, she attends to them like a surgeon to his prey. I cannot imagine where she gets this.

As a physician myself, I know the nature of those who see this work as a calling as oppossed to those that see it as a job. Dr. Heyman clearly engaged in his art with passion, skill and a whole heartedness.  But he likely never saw that his daughter also carried this passion forward in a non traditional way. My patients would not be as well without the ministering of Dr Heyman's daughter. His hands clearly drive the actions of Robin on a daily basis. She is not a physician but a healer none the less.  He continues to live on in ways he likely never even expected. As a fellow physician, I can only say that the true nature of a person does not only lay in his actions (as in the hands of a surgeon ) but also in the hands of those he has reared, influenced and taught. Dr. Heyman has done well with his sons and his daughters and the students he has trained. Rest in peace knowing that the world is a better place because you have lived.