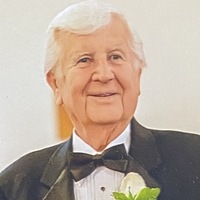 The Life of Vyacheslav Nikish

Vyacheslav “Jerry” Nikish, age 88, of Springfield, formerly of Aldan and Philadelphia, succumbed on Wednesday, January 5, 2022 to his 10 year battle with prostate cancer.  He died peacefully at home, surrounded by his family.

Born in the Ukraine, Vyacheslav “Jerry” was the son of the late Nicholas and Helen (nee Froh) Nikish.

An honorably discharged United States Navy Veteran, Jerry enjoyed an exciting career as an aerospace engineer for General Electric and Lockheed Martin, from which he retired.

Jerry will be most remembered for his storytelling, he could entertain dinner company around the dining room table for hours.  He would tell stories from his boyhood in the Ukraine; his immigration journey, traveling through several countries; and finally settling in a displaced persons camp in Germany, from which he was able to come to the United States.  He also enjoyed discussing his love of world history and politics.  Over the years, Jerry volunteered with many charitable organizations, and was a member of the Aldan Town Watch, for over 20 years.  He had many interests, but his passions were golf, skiing and bridge.

Jerry is survived by his wife of 32 years, Ruth M. (nee Pascal) Nikish; his sons, Alex (Elaine) Nikish, Andy Nikish and Mark Nikish; 6 grandchildren and 4 great-grandchildren. He is also survived by his sister, Rita Poslusznyj; a niece and two nephews.

*At the request of the family, all those vaccinated and unvaccinated, who are planning on attending the services will be required to wear masks.**