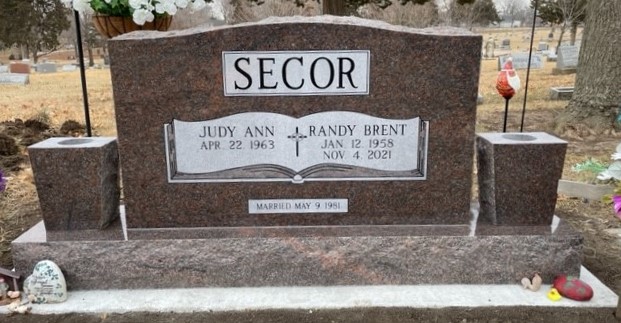 The Life of Randy B Secor

Randy B. Secor, 63 of Olathe, Kansas passed away Thursday November 4, 2021 at the Olathe Hospice House.

Visitation will be 6-8PM Thursday November 11th at Penwell-Gabel Funeral Home, Olathe Chapel. Funeral service will be 10AM Friday at Westside Church of the Nazarene followed by burial at Olathe Memorial Cemetery.

Randy was born January 12, 1958 in Elkhart, Indiana to William Henry Secor Jr. and Phyllis Maxine Secor (Rowe). Randy grew up in Baugo Township and attended Baugo Public Schools. He graduated from Jimtown High School in 1976. He was married to his one true love, Judy, May 9th, 1981. Randy, along with his dad and

brothers, ran a dairy farm until 1993, which, beside his wife, was his true love. Randy also worked for Crown International during his time in Indiana and made many friends. Randy worked for MidAmerica Nazarene University in the Facility Services Department for over 27 years. Randy held many positions including

warehouse supervisor, OSHA and EPA compliance officer, locksmith, maintenance supervisor, and Assistant Facilities Coordinator. Randy attended Bresee Church of the Nazarene in Elkhart, Indiana where he served in the choir and as the youth group leader and enjoyed playing on the church softball team with his brothers and many friends. He later attended Westside Church of the Nazarene in Olathe, KS where he was a member until his passing.

Randy loved watching the Minnesota Vikings, the Baltimore Orioles, Nascar racing, and the Indiana Hoosiers. He enjoyed gardening and continued to do so throughout his life. Randy also enjoyed spending time with his grandchildren and family.

Randy loved God with all his heart. He truly lived a life of service and never thought of himself as better than others. He was known and will be remembered for his dependability, quiet demeanor, loyalty, quiet strength, and humility. Over his lifetime, he came to know and love many people and desired more than  anything that they come to know Jesus Christ as their Lord and Savior.

He was preceded in death by his father William Henry Secor Jr, mother Phyllis Maxine Secor, and sister Beth Ann Secor. He is survived by his wife of 40 years, Judy Ann Secor of the home and children Andrew (Jennifer), Tabitha (Pat – son-in-love), Timothy (Torri), and William (Callie), grandchildren Keira, Reaux, Paisley, Brantley, Adriana, Amelia, and Christian, and siblings Tom (Pat), Fred (Donna), Rick (Jan), John (Teresa), and Todd (Stefanie), and many cousins, nephews, and nieces. He will be missed by his friends at MNU, his church community at Westside, and the many friendships developed in his years working with the greater Olathe and Kansas City community.

Flowers are welcome, but donations can also be made to the Africa Nazarene University Hydroponic Project to support the teaching of cutting-edge farming processes in the Department of Environment and Natural Resource Management through the Church of the Nazarene at https://nazarene.org/projects/africa/anuhydroponic-project-erm-department.

Filter Randy B Secor's Timeline by the following Memory Categories