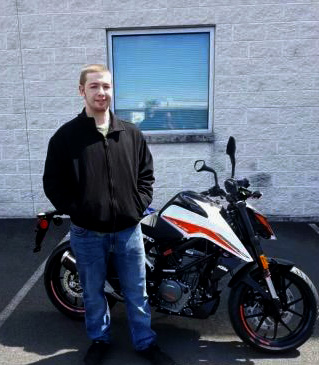 Gregory M. Calkins, Jr.20, of Pottsville, died Thursday, September 23, due to injuries sustained in a motorcycle accident in Foster Twp. Gregory was born in Pottsville, on February 23, 2001, a son of Roxanne Marie (Reber) Calkins and the late Gregory M. Calkins, Sr. He was employed as an aluminum extruder at Hydro in Cressona. He was preceded in death by his father, Gregory M. Calkins Sr. and a sister Lauren Garrett. Greg is survived by his mother Roxanne, five sisters,  Nicole Calkins, Amber Garrett, Sarah Moradel, Cassandra Cruz and Adara, a brother, Marquis Calkins. He is also survived by his significant other Greta Schultz and his Grandmother Carol, wife of the late Robert Reber as well as uncles, aunts, nieces, nephews and cousins. Greg was a motorcycle enthusiast, an avid online “gamer” as well as participating in parkour. He especially enjoyed spending time with his nieces and nephews. All are respectfully invited to attend a Visitation 6:00 to 8:00 PM on Tuesday, October 5th at the Mahal-Ritzel Funeral Home Inc. in Minersville. A Religious service will be held at 7:30 pm. with Pastor Joan Weiderhold officiating. Interment at Schuylkill Memorial Park, Schuylkill Haven. Mahal-Ritzel Funeral Home Inc., Minersville entrusted with the arrangements.