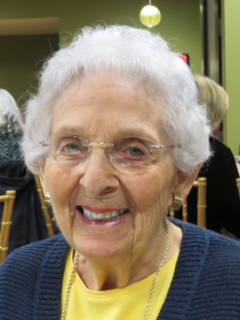 The Life of Mary Jane Kirchner

Obituary - Mary Jane (nee Lomasney) Kirchner, 89, of Wallingford, PA, died June 29, 2021, at Plush Mills Senior Living.  Born in Paterson and raised in Little Falls, New Jersey, she formerly was a resident of Ocean Pines, Maryland, before moving to Wallingford in 2018.

She brightened the world of her mother and father, Ruth (Cramer) and Paul Francis Lomasney, on February 20, 1932.  She overcame much as a child, learning to walk again after scarlet fever and losing her father at fourteen.  These events only served to galvanize her into a strong, independent, and resilient woman. She was Mary Jane to the family, but Jane to everyone else.

Jane met the love of her life, Richard F. Kirchner, in art class at Passaic Valley High School (PVHS) in 1949. In the PVHS 1950 Yearbook, they were listed as Class Lovers. They exchanged vows of a lifetime on November 3, 1956.  At parties, they often introduced themselves as Dick and Jane. They had many adventures together with world travels, loving friendships, and enduring memories for all people they came across.

She graduated from Berkeley College Secretarial school and worked as a secretary for several years before having children. In 1976 she got her New Jersey real estate license and became a successful real-estate agent and broker for Realty World.  Her career achievements included Realty World Multi-Millionaire Club for 11 years (1982-1993). In 1995, she received the New Jersey Association of Realtors Distinguished Sales Club Member award. Jane also served on the New Jersey Board of Realtors for Westfield, Summit, and Somerset before retiring in 1998.

Additionally, she enjoyed engaging in a round of golf or reading fiction thrillers where on occasion, if it weren’t a good story, she would jump to the end to find out what happened. Handed down from her mother was her passion for playing the piano. Her musical proficiency included the Top 40s Big Band era, Frank Sinatra, and songs from Phantom of the Opera.  Jane’s love of music extended to singing in the Pine Toners Choir at the Community Church in Ocean Pines, MD.  She was also an accomplished seamstress who would whip up a Jackie Onassis outfit for her granddaughter.

Her greatest gift was as a mother to her children. She bestowed on them unconditional love and support, and her children learned by her life’s example - facing challenges through humor and resilience. She was their biggest cheerleader no matter what their endeavors.

Her most cherished gifts were her grandchildren. This second-generation brought much excitement to her home at Ocean Pines, Maryland. Some of which would involve master strategies of Monopoly, humble games of Dominos. Also, in the backyard was a canal for crabbing or fishing off the dock. Her grandchildren knew that when you played a game with Ama, you had to be on your toes at all times, and if you ever cheated, she would call you out on it.  For her grandchildren, she was always there to lend an ear, listen with empathy and would tell them exactly what she thought with wit and charm.

She is survived by her husband Richard, children Christy (David) Lapp, Catherine (Steven) Camp, Richard (Courtenay) Kirchner Jr., and grandchildren Garrett, Derek, Katherine, Anderson, Christian, and Beckett. A celebration of her life will be held at a later date in the early Fall. Interment will be in Cedar Lawn Cemetery, Paterson, NJ.

Jane and I met at the golf course where we enjoyed many a game.  She was also my match play partner until her knees gave out.  Jane was a member of our six member SWAT (super women at table) team.  We enjoyed lunches out about every four to six weeks but especially at the Inn on the Ocean for Christmas.  Jane was a gracious, joyous lady wherever she was.  (I tried to drop a photo of us below but it didn't show up as expected.) She has been missed ever since her move to PA.

I so enjoyed my few times with Jane, talking and laughing a lot!  She was candid and witty, saying whatever she felt, and I found her delightful in that way!  Christy, my dear friend, would have me over when Dick and Jane were visiting. Jane and I would yuk it up in the kitchen watching Christy cook, and of course, we would be indulging in the latest special toddies created by Christy. It was often over a holiday, so Jane helped to make it a very joyful and festive time for me!

When I'd say goodbye, I'd always think how lucky Christy was to have such a warm and loving mom who was a hoot to boot!  She was a lovely lady with a beautiful smile, and I will miss seeing her again. Cheers, Jane!