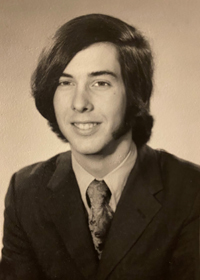 The Life of STEPHEN NEAL GALLAGHER

Stephen Neal Gallagher was born on May 1, 1954 in Des Moines, Iowa. He passed quietly early on June 11, 2021. He had lived with his brother Dennis and sister-in law since August 1, 2016 in Huntsville, Alabama. Stephen joined the Navy after graduating from Des Moines Iowa Technical High School, serving during the last years of the Vietnam Conflict.Most of his 10 years of service were aboard Navy aircraft carriers where he worked on the flight deck servicing large aerial reconnaissance cameras. He was married and divorced three times and was without children.Grateful for having shared in Stephen’s life: his mother, Barbara Jean Gallagher of Platte, SD; two brothers: Dennis (Elizabeth) Gallagher of Huntsville, AL, Robert (Dianne) Gallagher of Frankfort, IL; a sister, Christine Nepodal of Platte, SD; along with several nieces and nephews.Stephen was preceded in death by his father, Robert Neal Gallagher and brother-in-law, Gerald Nepodal.Graveside services will be held at 11:00 a.m. on Friday, June 18, 2021 at Highland Memory Gardens Cemetery in Des Moines.In lieu of flowers, the family requests donations be made to one of the following charities:* DAV (Disabled American Veterans) Charitable Service Trust - Their mission is to support physical and psychological rehabilitation programs that provide direct service to ill, injured, or wounded veterans.* Damon Runyon Cancer Research Foundation - Their mission is to raise money for high-risk, high-reward cancer research, which has made extraordinary breakthroughs in every area of cancer prevention, diagnosis, and treatment.* Cure Alzheimer’s Fund - Their mission is to fund targeted research with the highest probability of slowing, stopping, or reversing Alzheimer’s disease.