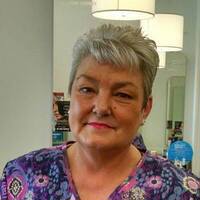 The Life of Terri Lee Pelham

Born in Abington, Terri was the daughter of Doris (the late Art) Gribble of Wildwood, NJ and Bruce Gerald Pelham (Linda) of Buckingham, PA.

She was raised in Holland, PA. and attended Council Rock H.S. Class of 1976. She also attended Bucks County Community College. In her earlier years she loved horses, bowling, water skiing, and summers in Beachwood NJ. Also singing and playing the piano was a hobby and a short career. She had a registered song copyrighted “Make It All Come True” in 1987 and had the opportunity to sing with Stevie Wonder and Ricky Nelson.

She then went on to clerical work and then became a Flight Attendant. Terri had a gift that whatever she pursued she performed very well.

Along with her Mother and Father, she is survived by her son, Andrew; granddaughter, Dakota; siblings, Scott  Pelham (Madeline), Traci Cochard (Chris), Kim Kuhn (Scott) and Melinda Ryan (Russell).She is now at peace with her Aunt Ginny and Uncle Stan Dudas along with other relatives.

All services will be held privately.

Anyone wishing to make a donation In Terri's Memory, the family suggests donations to:  Friends of Jean Webster (Sister Jean Websters Kitchen), P.O. Box 5146, Atlantic City, N.J. 08404 which was a cause Terri and her Aunt Ginny often supported.