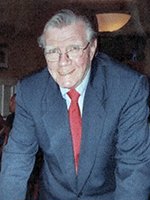 William N. Rossi, Jr., age 79, died Wednesday, January 9, 2013. He was the beloved husband of Hillary Stevens (Berguido) Rossi, to whom he was married 29 years. Born in New Bedford, MA, August 16, 1933, he was the son of the late William N. and Helen (Rogers) Rossi. Bill was a graduate of New Bedford High School, Leland Powers School of Television and Radio, and Boston University (School of Communications), where he was also an instructor. A well known radio personality from the mid-fifties to the late nineties, he started his career in New Bedford at both WNBH and WBSM. From there he was at WPRO in Providence and then onto Boston where he became a morning newsperson at WRKO (WEEI), and then KISS 108. He ended his career in Manchester, NH. In his retirement, together with his wife, he enjoyed many years as a member of the Screen Actors Guild, performing in local movies. Traveling was also a favorite pastime. A veteran of the Korean War, Bill served as a Corporal in the United States Army. Besides his wife, Bill is survived by his children, William, Patricia, David, and Daniel Rossi, all of Martha's Vineyard, his step-children, Steven Marides of Hyannis and Hillary Maridas of CA, and his nine grandchildren and two great-grandchildren. He also leaves his brother Thomas and his wife Marylou of Fairhaven, and his beloved niece and nephews, Kathleen Taylor, Tom Rossi Jr., and Peter Rossi. He was also the father of the late Michael Rossi and brother of the late Harriet Rossi Frates.