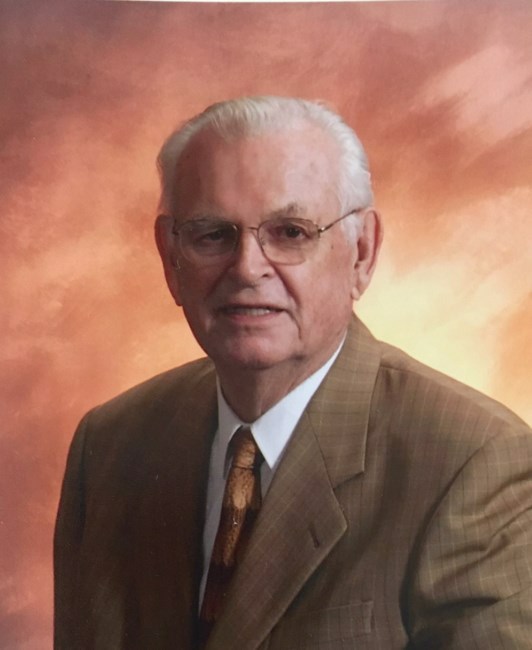 Charles Henry Clark, 89, of Ashburn, Virginia died peacefully on Christmas morning, in Ashburn. Charles’ life story is one of ambition, hard work, great success, strong faith, true love, and tremendous generosity. Raised by his young, widowed mother with little means, he “pulled himself up by the bootstraps”, making his way to the Nation’s Capital where he studied and worked full-time to build a career in government service spanning 40 years. Though we try to tell his story here, no one was a better storyteller than Charles, “LP”, Charley, Chuck, Dad, and Grandpa. He had a great wit, took command of any room he entered, and always left you impressed as one of the smartest people you had ever known. In his later years, with his children and grandchildren, he would motion them over next to him, put his arm around their shoulders to pull them in close, and begin a story from his experience, that typically closed with a short quiz and a life lesson. He was a devoted family man, supporting his mother after he left Iowa to pursue his career, entertaining family and friends from out-of-town with guided tours of his beloved Washington, DC, and never missing a game, concert, recital, or other life event of his children and grandchildren, as his health and distance would allow.

Charles was born on a farm in Cherokee, Iowa to Ada Bowker Clark and Henry Nicholas Clark on August 23, 1931, the fourth of five children. Charles was six years old when his father died of scarlet fever. He attended first grade in a one-room country schoolhouse; then second through twelfth grades in Cherokee when the family moved into town. He graduated from Immaculate Conception High School in 1949 with typing, stenography, and business classes. As a local athlete, he played basketball and baseball, earning the nickname “LP”—for either “Long Playing” or “Last Pup”—and softball and tennis. He played four years of Varsity basketball and baseball for IC. Beginning in the 10th grade, Charles worked for the Cherokee Farm Implement Company, a Studebaker and John Deere farm equipment dealer and repair business. As bookkeeper, he got his first taste of financial accounting that would remain his passion for the rest of his life.

Charles took correspondence courses at LaSalle Extension University and CPA training courses by mail. He came to Washington, DC in 1950 with a patronage position in the Senate Office Building under Senator Guy Gillette of Iowa as an elevator operator, the beginning of 40 years of civil service. He enrolled at the George Washington University in evening courses and lived at Delta Tau Delta fraternity house on H Street in Northwest Washington. There are so many stories from that time, working for and interacting with the 96 senators; he called the experience “Great!” A favorite story his family loved to hear concerned the lending of shoes to Senator Estes Kefauver of Tennessee. Apparently, the Senator was leaving the office for a black-tie affair wearing scuffed brown boots. Noticing the size of the elevator operator (Charles was 6’4” and 175 pounds), he asked what size shoes the young man wore. The next day, Charles’ black patent uniform shoes were inside his elevator in a brown paper bag with a note of appreciation for the swap. Charles joked that, while only two weeks on the job, he was already filling a Senator’s shoes.

Charles met the love of his life, Elise Johnson, of Alexandria, Virginia, on her first day reporting to work for Senator Thye of Minnesota in 1951. After helping her locate the Senator’s office, he remarked to a co-worker “That’s the kind of woman I’m going to marry.” After a classic courtship, they were indeed married on December 19, 1953 and resided in Arlington, VA. Charles obtained his first position with the Navy Department at the Bureau of Aeronautics during the Korean War, while continuing to attend school full-time. He graduated from GWU in 1954 with a BA in Governmental Accounting.

Charles was drafted into the Army in January 1955 and served at Fort Gordon, Fort Lee, and Fort Bragg. In 1956 he reported for duty at Supreme Headquarters Allied Powers Europe (SHAPE) in Paris-Versailles, France. He played on the SHAPE baseball team and travelled western Europe playing against other base teams. His duties with the Signal Corps Battalion centered around NATO’s land lines and communications inventory. There were many international crises involving NATO during 1956, including the Hungarian Revolution, the Suez Canal, the Kingdom of Libya and the Algerian War. After his military discharge, he returned to the Bureau of Aeronautics and was promoted to Director of Budget for Aircraft and Facilities, Navy Appropriations. He remained with the Bureau (which became Naval Air Systems Command) for 11 years. First, in the Office of the Chief of Naval Material, he moved to the Fleet Resources Office as Deputy Director, and then was appointed Division Director of Operations and Maintenance and Military Personnel Appropriations (Navy and Marine Corps). As Associate Director of Budget (Finance) and CNO Director, Financial Management Division, Charles was Senior Financial Officer for all appropriations of the Navy. He retired from the Office of the Navy Comptroller (NAVCOMP) in December 1989, receiving the Navy’s Distinguished Civilian Service Award.

A founder and president of the West Springfield Little League, he also served as president of Springfield Babe Ruth League and director of the Springfield Youth Club. He coached, umpired, or managed dozens of baseball and basketball teams and hundreds of games and players. Approaching retirement, he took up golf, and as with most sports, he excelled at the game. He played with the “Sandbaggers” at Twin Lakes Golf Club for many years. With an unparalleled memory, “Charlie” could recall not just every game he played, coached, or cheered, but players names, pitches, plays, courts, fields, and courses. A lifelong baseball fan, from Bob Feller (from Iowa) with the Cleveland Indians, to the Washington Nationals, he passed down his passion for the game to his children. A decades-long Washington baseball fan, he followed the Senators, to the Baltimore Orioles (when the Senators moved to Minneapolis and Texas), to ultimately the Nationals. He attended many games at Griffith Stadium, RFK and Nationals Park, and never missed a broadcast. We are so grateful to the Nats for winning the World Series for “LP” in 2019!

Charles and Elise were involved members of Downtown Baptist Church in Alexandria, Virginia, where they were married, and later Westwood Baptist Church in Springfield, Virginia. Charles was treasurer and finance chairman at Westwood for 30 years, and the couple taught Sunday school together. Charles and Elise purchased the Candlewyck of Alexandria in Old Town in 1979, operating the gift shop for 18 years. The couple supplied the White House with candles and enjoyed having well-known Washingtonians visit their shop.

Charles and Elise moved from their home of 44 years in Springfield, to Ashby Ponds Retirement Community in Ashburn, VA in 2011. There, Charles organized the Bocce tournaments and the couple enjoyed gardening together.

Charles was active in accounting and financial planning his entire life, from his bookkeeping days at John Deere, to assisting others with partnerships, trusts, tax preparations, profit-sharing and retirement benefit programs, staying on top of investment funds and stock market activity daily, right up to the very last.

Charles was preceded in death by his father, Henry Nicholas Clark, his mother, Ada Mae Bowker Clark, his brothers Howard Clark and Donald Clark, and his sister Delores Clark.