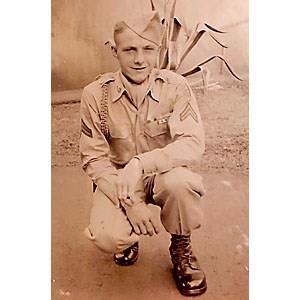 The Life of RICHARD E. SCHOLZE

In his 87th year, after a year-long battle with esophageal cancer, Dad took Mum's hand to spend eternity together. A Sergeant First Class in the Korean War, he defended and represented the country of which he was so proud. He is reunited in Heaven with his wife of 61 years, Carol Ann Scholze. He will also be reunited with his beloved grandson, Jeremiah; his parents, Ernest W. Scholze and Teresa Lorenz Scholze; and his in-laws, Kathryn Worrall and Herbert Surrey. His children will hold him forever in their hearts: Debbie (Tom) Dorsey, Richard E., Jr., Marlene (Jayne Novak), Donna (Ken) Morris, Tim (Teresa), Bill (Charlotte), and Lisa Marie Scholze. He is survived by his grandchildren of which he was always so proud to announce "I did this!": Michael (Amy), Joshua (Renalison), Justine, Kayla (Alan-Michael), Jacob, Savana, Nevada, Caleb, and his two great-grandchildren, Donovan and Kelsey; as well as his sister, Dorothy (Arthur) Heintzinger; brothers, Ernest (Sandy), Louis; and sister-in-law, Janet Audia. He will be forever in our hearts, and in his words, "Thanks for coming!"