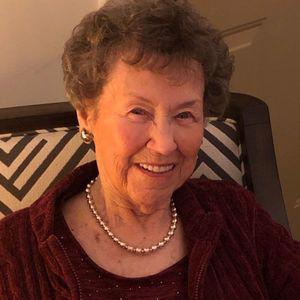 The Life of Margaret Jean Gilmour

Margaret Jean Gilmour (nee Kerr) of Springfield, PA, passed away on February 9, 2020, at the age of 96
Jean was born in Philadelphia, PA and was the wife of the late Richard C. Gilmour of Southampton, NJ, She was a longtime resident of Yeadon, PA.

Jean was the daughter of the late Joseph and Jennie (Mark) Kerr of Yeadon, PA
Jean is survived by her beloved children Bonnie Walter (Daniel), Barbara Jamison (Harry), Richard K. (Robin), Mark B. (France), 9 grandchildren, 18 great-grandchildren, many loving nieces and nephews. She was predeceased by her sisters Lavina Hein and Eleanor Brooks.

Jean attended Temple University and worked for AT&T. Her greatest joy was her family. She was an active, loving grandmother and great-grandmother who enjoyed attending birthday celebrations, school concerts & musicals, dance recitals and football games into her 90s. She was proud of her Irish heritage, often sharing memories of the yearly Twelfth of July Orangemen Ball and Day Picnic .

As a life-long North Wildwood girl, she spent summers at the shore from the time she was a child until last summer. Jean and her husband, Rich, loved traveling, especially their cross country road trip and European vacations.

In lieu of flowers contributions can be made to Penn Medicine Home Hospice - pennmedicine.org/hospice-donate or Gift of Life donors1.org