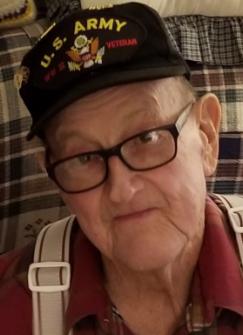 Edwin J. "Eddie" Schade, Jr., 93, of Lyon Station, died peacefully Saturday, November 2, 2019, in his home. He was the widower of Fern A. (Trexler) Schade, who died May 19, 1976. Born in Allentown, he was a son of the late Edwin J. Schade, Sr., and Florence (Hertzog) Schade. Edwin honorably and faithfully served his country as a veteran of the United States Army, having served during WWII.

Mr. Schade was employed as a machinist at Caloric Corporation, at its former Topton plant until his retirement in 1987.

Eddie enjoyed working in his shop, hanging out on the bench by the Quality Shoppe and Renninger's Farmers Market with his buddies. He also enjoyed attending Lyons Senior Softball games and volunteering his time at the Lyons Fiddle Festival. He was a member at the Lyons Fire Company, Kutztown Gun Club and the Ray A. Master Post 217 American Legion, Topton.

Ed is survived by his daughters: Eileen G. (Schade), wife of Gene A. Schlegel, Lyon Station; Erin S. (Schade), wife of George S. Dallago, Kutztown; son, Kelly T. Schade, Lyon Station. Other survivors include a sister, Betty (Schade) widow of John Kurzweg, Fleetwood. There are three grandchildren: Michael G. Schlegel, Dylan S. Dallago, Mauri L. (Dallago) Fillion, husband of Sgt First Class Tyler Fillion, US Army. He was a great grandfather to Peyton E. Schlegel, Henry V., Roselyn S. and Davey G. Fillion . In addition to his wife, Fern, and his parents, Edwin was predeceased by a daughter Sheila K. (Schade) Gilliland, who died December 12, 2001, and his longtime companion Audrey Hoffman who died March 16, 2019. The family would like to acknowledge nephew Eddie Gehringer and his wife Ingrid for their love and support shown to Ed and his family over the years and during his illness.

A funeral service to celebrate Edwin's life will be held on Friday, November 8, 2019, at 10:30 a.m. from Ludwick Funeral Homes, Inc., 25 East Weis Street, Topton, with Rev. Dr. Robert Santucci, officiating. Interment with military honors will follow in New Jerusalem Union Cemetery, Fleetwood. Relatives and friends may call on Friday morning, from 9:00 to 10:30 a.m. in the funeral home.

I have fond memories of my aunt Audrey and Eddie at my parents house when visiting or during holidays.