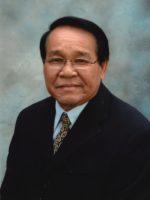 With the help of Ron and Nicki Gullickson, sponsoring the family to come to the United States in 1979, Khamsing migrated from Laos with his family to seek refuge from the communist government and to give his family a better opportunity. He was employed by Bayer for 25 years before retiring in 2006. Khamsing adored his grandchildren and lived every moment for them. He spent his days of retirement helping raise his grandchildren.

Khamsing was diagnosed with lung cancer in May of 2014. He was determined to live as long as his body was willing, to see his grandkids grow. Through pure determination and strength, he lived for over five years.

A visitation will be held from 12 to 1 p.m. on Saturday, October 19, 2019 followed by a funeral service beginning at 1 pm at the Amos Family Funeral Home.