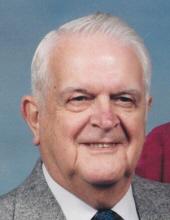 The Life of Robert F Handschuh

Born in Philadelphia on March 7, 1921, Mr. Handschuh was the son of Charles and Augusta (Heyne) Handschuh. He graduated from Central High School in 1939. Proud to have served America as a United States Marine Corps radar radio gunner, having flown in a Grumman Avenger airplane during the Okinawa Campaign of World War II, Mr. Handschuh was twice-awarded the Air Medal. Post-World War II.

University. On May 29, 1948, Mr. Handschuh married Gertrude Violet Schneck in Lester. He worked for the General Electric Company in Philadelphia for 42 years, eventually attaining manufacturing ?supervisory positions for production control within the switchgear department. He was a member of the GE Quarter Century Club.

A long-time member of Messiah Lutheran Church in Newtown Square, Mr. Handschuh served as a member of Church Council and the Evangelism, Finance, and Property Committees. Within his eightieth decade, he continued counting church offerings and scheduling ushers.

In addition, he and his wife were active members of the '39ers retirees group. Mr. Handschuh was a member of the Moylan-Van Diver American Legion Post in Bala Cynwyd. He enjoyed playing pinochle, listening to Big Band music, Frank Sinatra, and Tony Bennett.

He was an avid Phillies and Eagles fan. He had a particular affinity for collegiate sports, especially the Penn State Nittany Lions. In earlier years, he volunteered as coach for his son's Little League teams.

?Mr. Handschuh was predeceased by his wife of 54 years, and his brother Charles E. Handschuh. He is survived by his three children, Marilyn E. McMenamin (Robert) of Hopewell Junction, New York;Susan C. Handschuh of Broomall; and Robert C. Handschuh (Nancy) of Springfield; and six grandchildren, Lauren, Timothy, and Kristen McMenamin; and Lori Jagoda, and Kerry and Kelsey Handschuh. Great-granddaughter Avery was a bright light in Mr. Handschuh's life.

The family extends their appreciation and gratitude to the staff of Harlee Manor, Bakey Agency, and Caring Hospice Services for providing exemplary care.

Contributions in memory of Mr. Handschuh may be directed to Wounded Warrior Project or charity of choice.