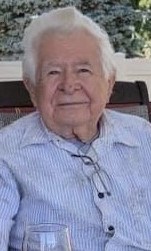 The Life of EUGENE J. MOLNAR

Born April 5, 1934, in Nagykolked, Hungary, he was a son of the late John and Terezia (Horvath) Molnar.

He was the widow of Shirley Ann (Hodgkinson) Molnar who predeceased him in 2018.

A structural engineer, Eugene was employed with Gilbert’s Associates and Boyd C. Wagner’s, Inc. , until his retirement in 1997.

He was a member of Holy Guardian Angels Church.

Eugene was an avid traveler, loved gardening, and enjoyed spending time with family, especially on their monthly trips to wineries.  He also loved going out for breakfast, which he did every Saturday, religiously.

Eugene was preceded in death by his daughter-in-law, Lisa R. Molnar, who died February 13, 2008.

A Memorial Mass will be held Saturday, January 28th at 11 a.m. at Holy Guardian Angels R.C. Church, 3121 Kutztown Road, Muhlenberg Twp.  A visitation will be held from 10-11 a.m. in the church.  Inurnment will be in the Chapel of St. George at Gethsemane Cemetery.