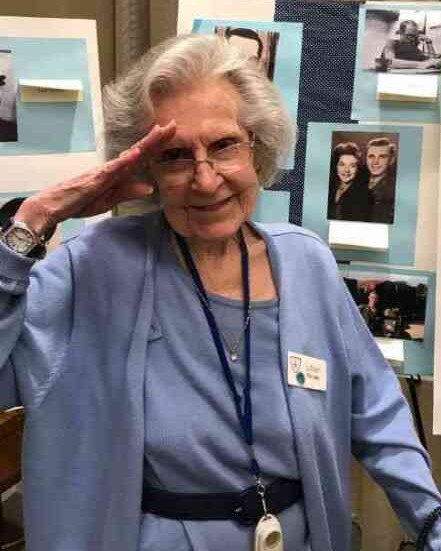 The Life of Lillian Odell Moraski

Lillian Moraski was a resident of the City of Alexandria for more than 70 years.  For the past 23 years, she lived at Goodwin House Alexandria.

Lillian and her husband, Joseph J. Moraski, raised their three children on North Early Street in Seminary Hill. They were members of Blessed Sacrament Catholic Church. Mrs. Moraski worked as a professional secretary for the Department of Defense at the Pentagon and at Cameron Station.

During WWII, Lillian served in the United States Marine Corps as Sergeant in the Women Marines. She was the sixth Moraski family member to serve at the same time during WWII. She held the distinction of being the most senior Marine at Goodwin House Alexandria.

Lillian Odell Moraski grew up in New Rochelle, New York. Her high yearbook lists her nickname as Mermaid Lil because of her love for the water. Mrs. Moraski began her love of painting at Goodwin House, participating in the Young At Art exhibit for a number of years.

An excellent seamstress, she sewed beautiful clothing and created many ballet costumes as a volunteer for the Virginia Ballet.  She also used her sewing talents to make and donate many items to raise money for the Goodwin House Foundation.

A Mass of Christian Burial will be held at Blessed Sacrament Catholic Church on Tuesday, October 19th, 2021 at 11am.  Interment with military honors to follow at Ivy Hill Cemetery.

Donations in lieu of flowers may be made to the Goodwin House Foundation, Alexandria, Virginia.